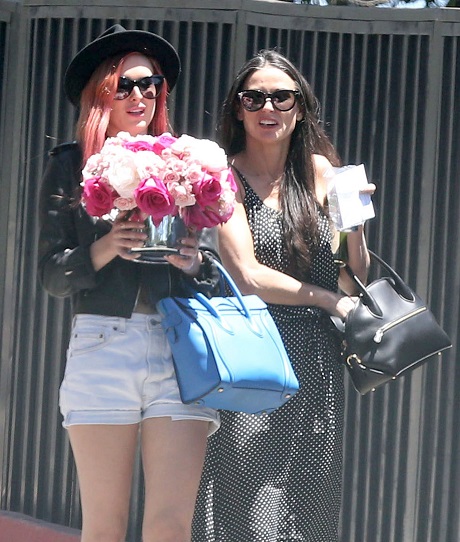 Demi Moore will forever be a cougar, much to her daughters’ dismay. If Rumer Willis and her sisters were the children of a typical middle class family, Demi would be the soccer mom that picked them up from school in high heels and a halter top and slip her number to half of the high-school football team when nobody was looking. There is no doubt in our minds that Demi’s daughters have had enough of their mother poaching guys that they should be dating themselves.

According to the September 8th edition of OK! Magazine, Demi Moore is at it again. Demi is reportedly feuding with her daughter Rumer over her latest flavor of the week, Sean Friday. Sean was originally Rumer’s friend, but Demi swooped in and began hooking up with him even though it clearly bothers Rumer. A source told OK! Magazine, “Demi never takes Sean anywhere. Rumer told her she thinks it’s cruel to string him along.”

Rumer can tell her pal Sean is falling in love with her mom hard and fast, and she doesn’t want her man-eating mama to have her way with him and then dump him when she has had enough.

The magazine’s source goes on to explain that Rumer has given Demi an ultimatum; she told her mom she needs to either set Sean free or move forward with the relationship. Do you think that Rumer has a right to be upset that her mom is using Sean as a booty call? Is Rumer really that concerned about Sean and Demi’s relationship, or is she just jealous? After all, she knew Sean first. Let us know what you think in the comments below!