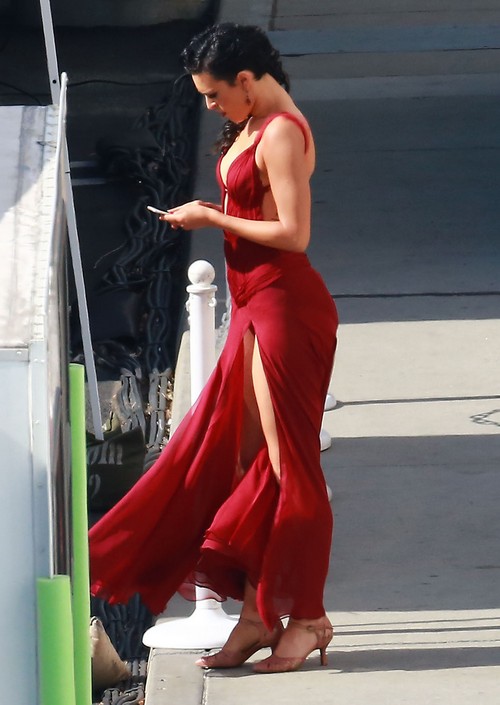 Rumer Willis’s relationship with her ex step-father Ashton Kutcher has always been questionable and raised a few eyebrows – and now Ashton’s soon-to-be wife Mila Kunis is furious over the crush Ashton has on her! When Ashton Kutcher and Demi Moore tied the knot – the media had a field day with his alleged affair with Rumer Willis. Since then Rumer and Ashton have remained close, but now that she is performing on Dancing With The Stars, her new sexy gig has apparently sparked old feelings that Ashton has for her, and Mila Kunis is not having it!

The May 18 edition of GLOBE Magazine reveals, “Ashton has been hooked on Dancing With The Stars ever since his former stepchild Rumer Willis, daughter of his ex Demi Moore, has been wowing audiences with her sexy moves. Mila is fuming because Ashton’s eyes have been glued to the set – and Rumer’s smokin’ body.” It sounds like Ashton Kutcher could be sleeping in the dog house before the Season 20 finale of Dancing With The Stars airs on ABC.

Rumer Willis and Ashton Kutcher were always criticized for being “too close” when they were living under the same room and he was married to her mom Demi Moore. This probably isn’t the first time that Ashton and Mila have fought over his former stepchild. But, Rumer’s new body, lease on life, and smoldering confidence since she joined Dancing With The Stars is probably starting to make her seem like an actual threat to Mila Kunis. Before, Mila probably never took Rumer seriously – but now that she is strutting her stuff on the DWTS stage every week Mila is beginning to realize that she could be an actual threat to her relationship with Ashton.

Do you believe the rumors that Ashton and Rumer used to have a “thing” while he was married to Demi? Should Mila Kunis be worried about their relationship – or would Ashton be a fool to risk losing his baby-mama Mila over Rumer Willis? Let us know what you think in the comments below!