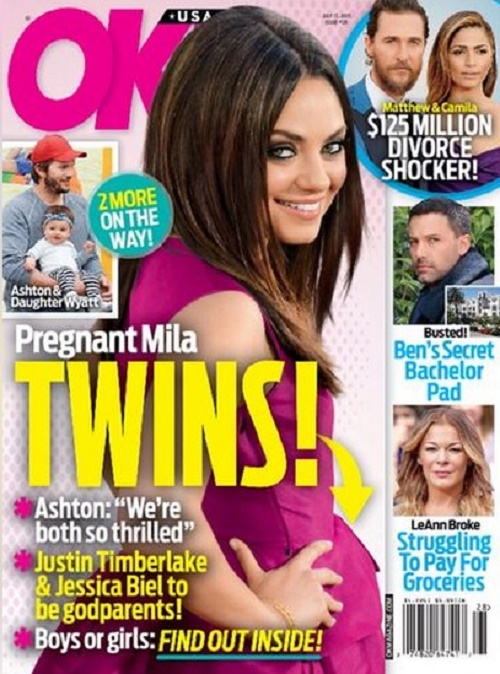 Ashton Kutcher’s wife Mila Kunis is reportedly pregnant again, and this time it is with twins! The infamously private couple gave birth to their now 9 month old daughter Wyatt in 2014, and then reportedly got married at a small and super secret wedding. Both Ashton and Mila have both revealed in interviews that they can’t wait to give Wyatt a baby brother or baby sister – and it looks like the lucky tot could be getting both!

The July 13 cover of OK! Magazine features a photo of Mila with what appears to be a baby bump, and the headline screams: “Pregnant Mila – Twins!” The bold OK! cover goes on to reveal that both Mila and Ashton are “so thrilled” and their pals Jessica Biel and Justin Timberlake (who just had a baby of their own) are going to be the godparents.

According to OK! Magazine’s inside sources, Mila and Ashton haven’t actually confirmed that they are pregnant with twins – but it is “so obvious.” An insider dished to OK! Magazine, “Mila is tired all of the time now, for one thing. And she gets hungry really quickly and if she doesn’t eat right at that moment she gets super crabby. She is still eating healthy foods like chicken and vegetables, but it is clear that her cravings have hit full force, the other day she was eating a burger WHILE pushing the baby carriage.” The insider also notes that Mila has stopped working out religiously, and hasn’t touched a drop of alcohol – no beer or wine!

So basically, Mila Kunis is definitely having twins because no one has seen her drink a beer in a few weeks and she turns into a diva when she is hungry. She’s definitely pregnant – or maybe just a human being who hasn’t gotten drunk yet this month and is a diva when her blood sugar gets low. What do you guys think – is Mila Kunis pregnant with twins? Or is the tabloid grasping at straws? Share your thoughts and theories in the comments below!