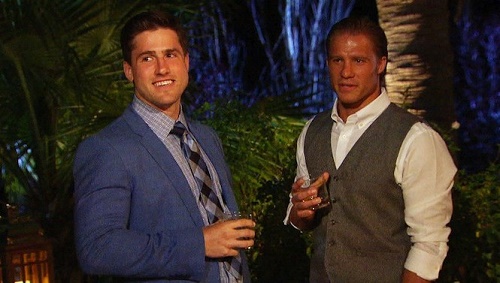 For those of you who don’t remember from last season of Bachelor In Paradise there is a constant rotation of guys and girls during every episode. The original cast members released by ABC will just mark the beginning of the show, and at every episode’s end some people will go home and new people will arrive to replace them. We are currently in the midst of Kaitlyn Bristowe’s season of The Bachelorette, and according to Reality Steve’s spoilers there will be a handful of guys from Kaitlyn’s season on Bachelor In Paradise – ABC just hasn’t released their names yet.

Will there be a gay romance on Season 2 of Bachelor In Paradise. According to Reality Steve’s spoilers, the following guys from Kaitlyn Bristowe’s season have been added to the Bachelor in Paradise 2015 cast list: Jared Haibon, Tanner Tolbert, Jonathan Holloway, and JJ Lane. JJ has stirred up quite a bit of drama so far on The Bachelorette with his bizarre bromance, and possible romance, with fellow contestant Clint Arlis. Clint confessed on camera that he was basically smitten with JJ, and they hung out non-stop in the Bachelor Mansion. However, there was a huge lover’s quarrel on the show when Kaitlyn put Clint on the post and sent him home – and his bestie JJ stabbed him in the back and told Kaitlyn that Clint was there for the wrong reasons.

Now that JJ Lane has been added to the Bachelor In Paradise 2015 cast list, rumor has it that Clint Arlis will pop up in paradise as well – which will definitely make for some must-see TV. Will Clint and JJ make up, and fall in love in paradise? Or will Clint still be upset by what transpired on The Bachelorette and try to take out JJ? How crazy would it be if JJ and Clint gave their roses to each other instead of the women on the show? Let us know what you think in the comments below and don’t forget to check CDL tomorrow for more Bachelor In Paradise 2015 spoilers and news.