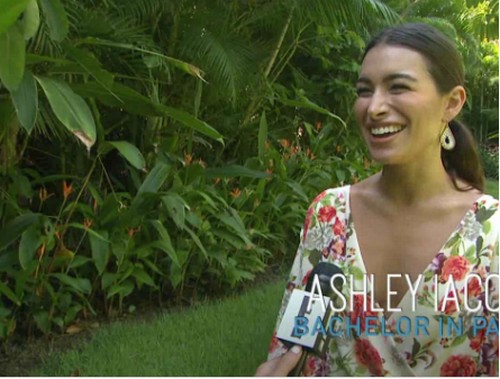 Bachelor In Paradise 2015 spoilers have been teasing all summer that Ashley Iaconetti was going to lose her virginity during the season finale of the ABC reality TV show and have sex with Kaitlyn Bristowe’s ex Jared Haibon. During last week’s episode of Bachelor In Paradise, Ashley I. invited Jared to spend the night with her in the Fantasy Suite – and he happily accepted. In the promo video for the season finale Ashley I. (who had been pounding drinks all night) slurred that Jared was definitely “hot enough” to take her virginity.

But, we have bad news for Bachelor In Paradise fans – it turns out that Ashley I. and Jared having sex was all just some creative editing on behalf of the producers, and no one is losing their virginity during the Season 2 finale. Ashley actually is telling everyone that it was all staged and the produers told her to lie and say she was planning on having sex for the camera. Apparently, Jared and Ashley’s Fantasy Suite date isn’t so fantastic – and they actually break up before they leave Mexico and head back home.

A report from TMZ reveals, “Ashley I.’s telling friends … producers fed her those lines about possibly losing her famous virginity. If you missed it, Ashley’s chastity seemed up for grabs when she drunkenly slurred that she dug Jared enough to give it up to him. Sources close to Ashley say she knows virginity is the thing that’s made her famous, so she’d never blow it on a one-night stand. We’re told she’s holding out for Mr. Right — who, as we all know, rarely pops up on reality shows.”

So, Ashley I. is still a virgin guys – and it is probably for the best. Ashley was already obsessed with Jared and borderline stalking him in paradise. Can you imagine how bad it would have been if she gave up her v-card to him? He would have had to take out a restraining order! Are you surprised that Ashley and Jared Haibon don’t have sex during the finale? Let us know what you think in the comments below and don’t forget to check CDL tomorrow for more Bachelor In Paradise 2015 spoilers and news.