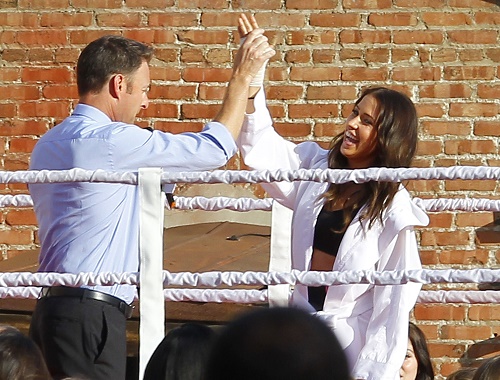 Bachelorette 2015 spoilers have been teasing that Season 11 of the ABC reality TV dating show will feature not one but two bachelorettes. Chris Harrison announced during the Bachelor 2015 finale that both Britt Nilsson and Kaitlyn Bristowe would be on the next season of The Bachelorette. An official press release for Episode 1 of The Bachelorette teases spoilers about the season premiere – and confirms what we have known for months now, that it will be up to the 25 guys to decide which woman will be the next Bachelorette.

Bachelorette 2015 spoilers tease that on Episode 1 of the show, both Britt Nilsson and Kaitlyn Bristowe will be introduced to the 25 eligible bachelors as they arrive in their limos. After briefly getting to know both Britt and Kaitlyn – the guys will be asked to vote for which girl they want to date during Season 11. Here’s this kicker, Bachelorette fans won’t get to learn whether they chose Britt Nilsson or Kaitlyn Bristowe until Episode 2, which is set to air on May 19.

According to Bachelorette 2015 spoilers for Episode 2, after the official Bachelorette has been chosen, she will have a traditional cocktail party like in previous seasons, and at the end of the night she will hold a rose ceremony and send 6 guys home. So, which woman is the next Bachelorette? Well, it’s not exactly a secret. Spoilers confirmed weeks ago that Kaitlyn Bristowe was chosen to be the Season 11 Bachelorette by the guys – and photos were snapped of her filming various dates.

So Bachelorette fans, are you as excited as we are for the two night Season 11 premiere? Do you think that the votes were close – or does Kaitlyn Bristowe win over Britt Nilsson by a landslide? What will come of the guys that didn’t vote for Kaitlyn and wanted to date Britt? Let us know what you think in the comments below and don’t forget to check CDL for all of your Bachelorette spoilers and news!