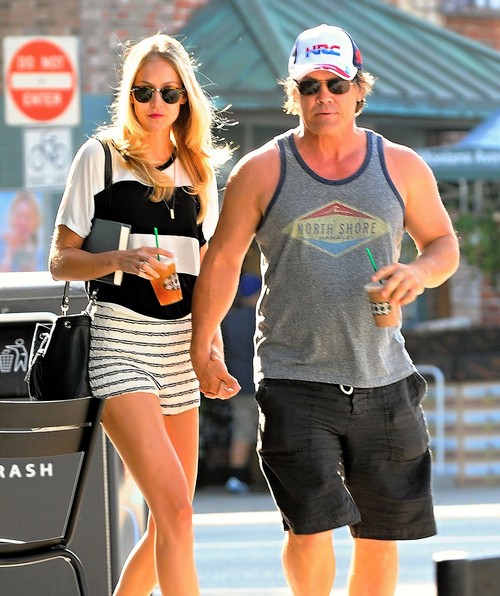 According to the National Enquirer, the Barbra Streisand and James Brolin marriage is a hotbed of arguments these days – all over James’ son Josh Brolin’s impending wedding to a woman that Barbra considers to be less than reputable. Barbra Streisand is threatening to boycott the wedding of her step-son over his choice of bride and her hubby James Brolin is not pleased with her stuck up attitude.

You have to admit that Josh Brolin’s romance timeline with his fiancee Kathryn Boyd is pretty sketchy. Kathryn Boyd worked as Josh’s assistant since 2011 and they began dating in March 2013 just a month after his marriage to Diane Lane broke up. What are the odds that the volatile Josh Brolin wasn’t already fooling around with his assistant prior to his split with Diane Lane?

Another sign that all was not right with the Diane Lane, Josh Brolin split was that Barbra Streisand took Diane’s side in the divorce. Barbra went out of her way to make sure that Diane was treated fairly in her monetary settlement as part of the split. In fact, it was Barbra that fixed up Josh and Diane so she took it hard when their marriage flopped, particularly when allegations of Josh abusing Diane arose.

The National Enquirer reported that an insider said Babs sees the engagement between Josh Brolin and Kathryn Boyd as Josh “basically marrying the hired help when he once had an Academy Award nominated actress for a wife.” To make things worse, Barbra has continued her close friendship with Diane Lane ever after her divorce from Josh.

According to the tabloid, Barbra thinks Josh’s fiancee is “a social climber who’s using Josh for his money and tinseltown connections.” Josh, for his part, at least according to the Enquirer, thinks that Barbra is being a meddlesome step-mother and her discouragement has not slowed his wedding plans with Kathryn Boyd, no matter how much his family doesn’t like it.

Maybe the third time will be the charm for Josh Brolin if he makes it down the aisle with Kathryn Boyd – or it could implode brilliantly like his other two marriages. Brolin’s hard living and alleged cheating and spousal abuse wrecked at least one of his prior relationships, maybe bother. Will he stay on the straight and narrow with wife #3?

Either way, it doesn’t look like Josh Brolin and Kathryn Boyd can expect to be serenaded by the dulcet tones of the legendary Barbra Streisand at their nuptials…