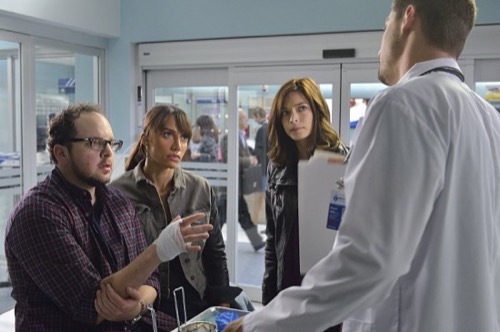 Tonight on the CW their hit fantasy drama BEAUTY AND THE BEAST airs with an all new Thursday June 25 season 3 episode 3 called, “Bob & Carol & Vincent & Cat,” and we have your weekly recap below. On tonight’s episode Cat (Kristin Kreuk) and Vincent (Jay Ryan) team with married FBI agents on a case; J.T. (Austin Basis) thinks he may possess super powers; Tess contemplates a career move; and Heather makes a suggestion that could make her big sister’s life a little easier.

On the last episode, Vincent (Jay Ryan) moved in with Cat (Kristin Kreuk) which forced them both to address the rapid changes in their relationship while they investigate a shocking new lead in their hunt to track down who was behind the super-human experiments. JT (Austin Basis) tried to impress Tess’ (Nina Lisandrello) brothers and discovered that there may be some side effects to the medicine he received from Agent Thomas (guest star Arnold Pinnock). Meanwhile, Heather (Nicole Gale Anderson) returned to town with a surprise announcement. Did you watch the last episode? If you missed it we have a full and detailed recap, right here for you.

On tonight’s episode per the CW synopsis “when two married agents (guest stars Alan Van Sprang and Natasha Henstridge) from the FBI take over an investigation, Cat (Kristin Kreuk) and Vincent (Jay Ryan) hope they are seeing a future version of themselves but fear their work schedules are jeopardizing their relationship. When the two couples bond and team up on the case, a mysterious coincidence surfaces that raises suspicions. JT (Austin Basis) investigates whether he has super powers of his own while Tess (Nina Lisandrello) considers a career move. Meanwhile, Heather (Nicole Gale Anderson) offers up an interesting option to make her big sister’s life a little easier. Stuart Gillard directed the episode written by Melissa Glenn.”

Tonight’s episode looks like it is going to be great and you won’t want to miss it, so be sure to tune in for our live coverage of CW’s Beauty and The Beast at 9:00 PM EST! While you wait for our recap hit the comments and let us know how excited you are for this episode! Also, check out a sneak peek of tonight’s episode below!

Finding that key balance between life and work is and will always will be a struggle. However, on tonight’s all new episode of “Beauty and the Beast,” Cat and Vincent appeared to be almost fighting a losing battle. Not only are these two investigating Agent Thomas’s murder but their whole moving in together is still kind of fresh.

So what do these two do when their own form of adjusting continues to fail on them – they turn to Heather, who was still fresh out of her engagement and was really not in the right frame of mind to be of any assistance.

See the wedding planning was taking up too much of their time. What with dealing with beasts and regrettable letting their romance slide. So, in the end, Cat hired a wedding planner she felt confident in. And, unfortunately, she shouldn’t have had that much trust in someone like Heather.

Heather’s version of helping was passing off her own dreaming wedding onto her sister. Nevermind that they have very different personalities. Or that Vincent wasn’t the big wedding type.

Heather saw her chance to finally plan the wedding she dreamed of and she simply thought of Cat and Vincent as extra pieces.

Thus Cat and Vincent ended up having to ignore her. As in when they saw her calling, they either pressed ignore or had one of their friends claim they were busy. Although technically they were busy because the case with Agent Thomas later hit a wall.

Apparently Cat and Tess were thrown off the case.

Two agents from Homeland Security swooped in on their territory and were essentially going to be taking over. And with Tess’s impending Captain Review on the line, the detective knew that she couldn’t afford to back Cat when her partner attempted to put a fight. So when Cat refused to let this go – she enlisted Vincent’s help instead.

Vincent was the one that granted her access to Thomas’s room and Vincent stayed by her side when Cat got dragged down to the precinct by the feds.

Agent Bob and his wife Agent Carol were not pleased. Livid, will be more like it. Yet, after spending hours and coming up with no apparent leads, the agents felt lit was in their best interest to enlist Cat’s help. So they allowed her back onto the investigation and oddly they didn’t question her when she said her doctor fiancée could be of use.

But here’s what they found: whoever killed Agent Thomas was skilled as in highly and most likely military trained skill. The assassin was able to hit a target over a mile away and they shot through both a window and a TV screen.

So with Vincent’s help, the feds were able to widen the search on vantage points. And what they came up with was a known drug kingpin. It seems someone used his apartment to kill their agent and in order to take the drug dealer down – Cat and Carol had to find a way into his apartment.

Luckily, very attractive women never have a problem with getting themselves invited in. They found an illegal cache of guns on weapons while on the scene.

Tess then made one of the biggest bust in her career. And that came in handy when she later walked into her interview.

The game was up for Bob and Carol. Cat and Vincent had invited them out to dinner but after they were left feeling overwhelmed by Heather and all her plans they then tried to cancel. And when they couldn’t reach either of their cell phones, Cat contacted their office but found out neither agent actually worked there.

Cat and her friends had been had.

Whoever was behind the experiments had sent in “Bob and Carol” to clean up. While Vincent and Cat were able to discover this in time – at least when it came to saving themselves from a bomb planted on Vincent’s boat – he was forced into revealing his beast side. So now Carol and Bob don’t want to kill anyone. They merely want to use Cat to capture Vincent.

And as for that wedding, Cat sat her sister down and the two finally discussed Heather’s problems. It seems her sister needed someone to talk to and the wedding was as much of a distraction for her as it was for Vincent and Cat. So, ultimately, Cat took back her wedding.

She and Vincent are going to get married the way they want to. And in other good news Tess became a captain. Something that will of course require its own celebration. Thus everything appears to be fine in their lives and that’s what these guys are choosing to see.

And the reason they haven’t been disillusioned is because J.T. hasn’t told anyone about his freakish ability to heal within a matter of hours.