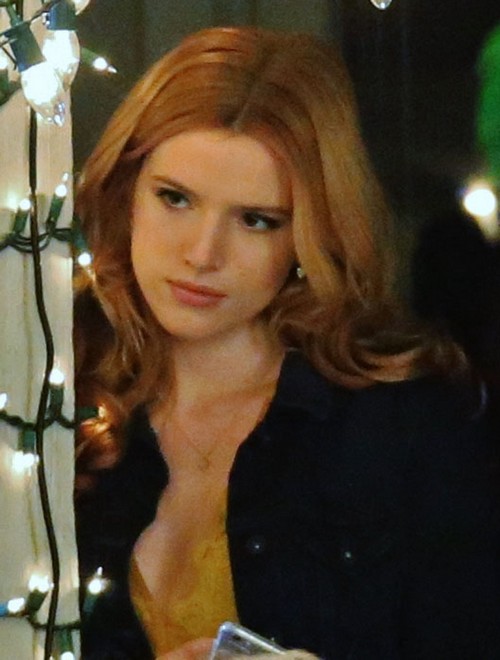 Bella Thorne recently discussed an unnamed “Hollywood mean girl” whom the “Midnight Sun” actress says she avoids at all cost and now fans of the actress are wondering if it is Kendall Jenner or Gigi Hadid. Bella Thorne dropped several clues as to who her adversary might be but was coy when asked to disclose exactly who Bella hates in the young Hollywood crowd. Now it looks like the mean girl mystery may be solved and she may be a young Hollywood actress who is off everyone’s radar.

According to Bella Thorne, there is one girl in the pack of young Hollywood stars that she really doesn’t like. Bella told Seventeen magazine in a recent interview, “I have a mean girl. She’s in the business, and she’s very, very mean. I stay away from her at all costs. I never say hello to her.” Of course everyone wants to know who Thorne is talking about and many have already started trying to deduce who the mean girl is.

Thanks to Bella Thorne, we have several clues as to who the “Midnight Sun” star is talking about and it’s easy to pare it down to just a few famous faces who might be the culprit. Bella admitted, “Her siblings are not mean like she is. It’s just her. One of the reasons I don’t like her is because she’s been a billionaire since she was very little, and she’s never had to work for anything in her life.”

So this Hollywood mean girl has siblings that aren’t awful and was born into money. The first family like that to come to mind would be someone from the Kardashian – Jenner camp. Bella Thorne is good friends with Kylie Jenner so the mean girl could possibly be Kendall Jenner. The problem with that is Bella Thorne already tweeted and said that the person she spoke of is not a Kardashian or a Jenner. Kendall Jenner is out of the equation.

Gigi Hadid is another young Hollywood face that comes to mind. Bella Thorne is good friends with Gigi’s sister Bella Hadid. The model does come from a super rich family and certainly doesn’t have to work for anything. Hadid’s father is a real estate developer worth around $200 million and her mother is Yolanda Foster from “The Real Housewives of Beverly Hills.”

Honestly, we were really leaning toward Gigi Hadid as being the possible mean girl Bella Thorne was referring to until a little blurb in the Huffington Post pointed toward a much more viable candidate.

We’re so sure Bella Thorne is talking about Nicola Peltz that we’ll even give a virtual high five to the Huffington Post for figuring it out first. For those who say Nicola who? The young actress plays Bradley Martin in the A&E hit “Bates Motel.” She also had roles in “Transformers: Age of Extinction,” “Affluenza” and “The Last Airbender.”

Nicola Peltz comes from a very wealthy family so when Bella Thorne said this person comes from a billionaire family, she wasn’t kidding. Nicola’s father, Nelson Peltz, is a founding member of Trian Fund Management and is reportedly worth almost $2 billion.

Bella Thorne’s boyfriend Gregg Sulkin also appeared in “Affluenza” with Nicola Peltz and according to HuffPo, Nicola Peltz and Bella Thorne do not get along. Nicola also fits the bill because she does have several siblings with one in the industry and another who plays professional hockey.

To further back up their claim that Nicola Peltz is likely the mean girl who Bella Thorne is talking about, it turns out that the young “Bates Motel” actress already has a bit of a reputation for being very spoiled and so difficult to deal with that her family is often bringing in new help.

The turnover in the Peltz home is so bad according to the report, that the family is having to hire new help in the former of housekeepers, nannies and other employees almost on a weekly basis.

Here’s some more food for thought. Nicola Peltz is 20-years old and is a young Hollywood actress. Nicola isn’t friends with the usual Hollywood crowd though. No one ever sees the young film and television star hanging around other members of young Hollywood like Bella Thorne, Gigi Hadid, Kylie Jenner, Kendall Jenner, or anyone else in the Hollywood scene. Nicola Peltz never shows up in any other stars’ social media photos and none of them are in hers either.

Bella Thorne really got everyone wondering about her disdain for a certain Hollywood “mean girl” and now fans are wishing she would just fess up and let us know who is right about her entertainment industry enemy.

While someone along the lines of Kendall Jenner or Gigi Hadid seemed the obvious choice, after following all the clues and doing a bit of searching, we believe the girl Bella Thorne doesn’t want to name (or even say hello to) is Nicola Peltz.