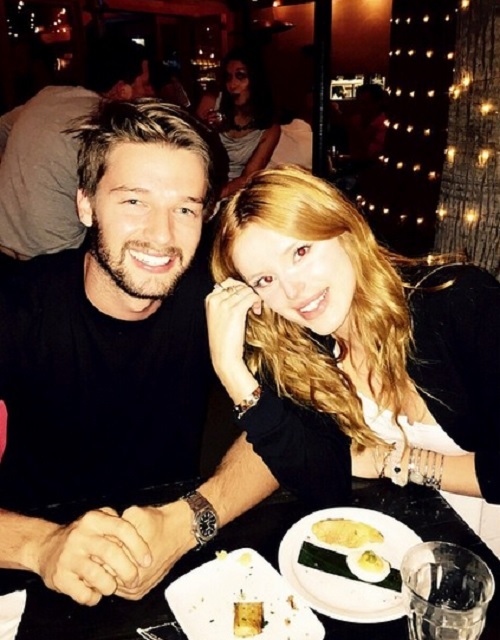 Bella Thorne has been seen arm in arm with none other than Miley Cyrus’ man Patrick Schwarzenegger. The two were photographed last night leaving the Mud Hen Tavern in Los Angeles. The sighting comes only weeks after Miley Cyrus’ fans attacked Patrick for being photographed with another girl in Cabo. Patrick responded to the attacks claiming that he was cheating on Miley Cyrus by tweeting, “Omg. It’s one of my best friends girlfriend,” reassuring fans that he would never cheat on Miley Cyrus.

Apparently, this wasn’t enough for Miley’s fans, who went on to attack Patrick on social media. Fans tweeted out their anger and disgust for Patrick, some even going as far as sending death threats his way.

Now, only weeks later, photos have surfaced of Patrick Schwarzenegger and Bella Thorne. Bella immediately took to Instagram to clear everything up. She posted a picture with Patrick and wrote, “With my homie @patrickschwarzenegger if you aren’t already following him you should :)) disclaimer *** we are just friends :)”

Can you blame Bella for responding so quickly!? After seeing those hate tweets that were sent to Patrick, who wouldn’t address the rumors immediately. Hopefully, this will keep all of Miley’s fans cool, calm, and collected.

If Thorne’s comments didn’t ease the fans enough, Patrick took to Twitter and wrote, “Good little dinner meet with @MrScottSpeer and @bellathorne cool stuff coming.” There you have it. The two were also meeting with a director to discuss upcoming projects.

Miley’s sister recently said that she loves Patrick, and thinks that he is good for Miley. She went on to say that he fits in great with the family, and that the two balance each other out.

The two have been going strong for five months now, despite the countless rumors of infidelity. Let’s see if they can get through this current rumor as well. What do you think? Are Miley Cyrus and Patrick Schwarzenegger the perfect couple, or is there trouble in paradise?