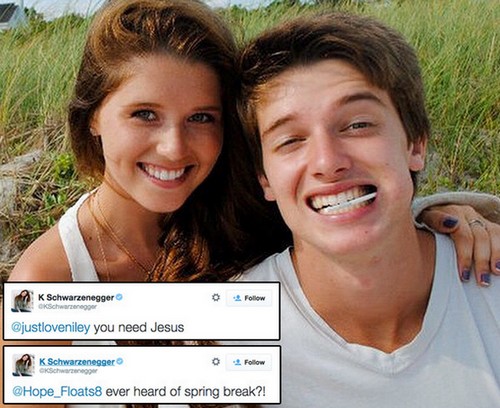 Patrick Schwarzenegger was caught cheating on Miley Cyrus. Patrick was snapped swimming with, kissing, and caressing his ex-girlfriend, Taylor Burns. We aren’t talking friendly little hello pecks. Patrick Schwarzenegger was photographed cheating with Burns. The former lovers kissed deeply and held each other during a Spring Break vacation in Cabo. It appears Billy Ray Cyrus’ oldest daughter has turned off another boyfriend.

Since the photos of Patrick cheating on Miley surfaced, the ‘Wrecking Ball’ singer has refused to answer any of his calls, according to Hollywood Life. The images of her boyfriend kissing and sensually holding his ex-girlfriend are the last straw. Miley attempted to think about their relationship, but the second she found he cheated with Taylor Burns, she “completely shut down.” The couple’s friends are pretty sure Miley Cyrus and Patrick Schwarzenegger will break up for good. Miley is humiliated and now knows Patrick is a cheating bum AND a liar.

Our insider assures CDL that despite Patrick’s claims he did not cheat, Miley Cyrus and Patrick Schwarzenegger are 100% broken up. Done. Split. Over. Pat is just like his cheating father, Arnold Schwarzenegger. Miley refuses to believe him and the photos prove Patrick cheated.

It certainly appears there is no hope for Miley and Patrick. The damming photos show Pat flirting and talking with multiple co-eds, even getting “handsy” with one of his friend’s girlfriend. The rest of the images show Schwarzenegger smiling as Burns smears lotion on his back, touching her as they talk, and flirting with his ex.

What is it with Miley Cyrus? She seemingly repels men. Is her immaturity? Is it her redneck roots and desperate neediness? All of Miley’s rumored drug use or the constant need for attention? Liam Hemsworth, her ex-fiancé, cheated on her with January Jones. Liam was first caught leaving an Oscar party with Jones and having a very public make out session with the ‘Mad Men’ actress. It appeared Miley and Liam were going to call it quits, but Cyrus went back after apologies and denial. According to allegations, Miley kicked him to the curb for good after she caught Hemsworth texting January Jones after their reconciliation.

It looks like Miley won’t be making the same mistake again. Patrick was photographed on March 19 looking very sad and trying to play it low key in a hoodie. His phone was clutched in his hand. Maybe he was attempting to call Cyrus?