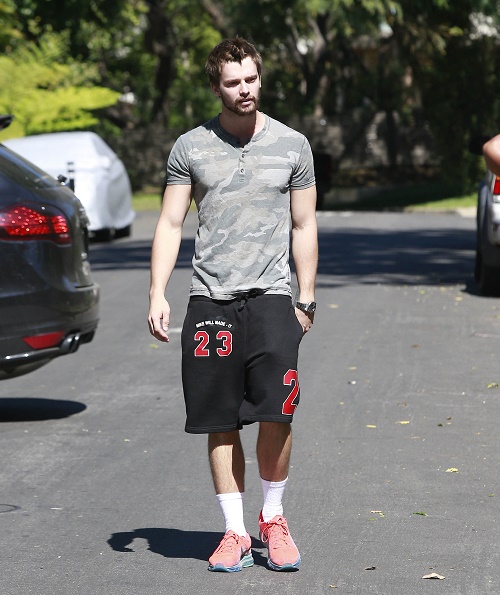 Patrick Schwarzenegger was allegedly caught cheating on Miley Cyrus with Taylor Burns while he was Spring Breaking in Cabo San Lucas, and this deliberate breach of faith and trust has mortified Miley Cyrus. It’s anyone’s best guess as to exactly how serious Schwyrus was to begin with, but it’s no secret that they considered themselves somewhat of a couple, so the fact that Mr. Patrick betrayed Miley – and with his ex girlfriend no less – might be enough to end things. For good.

While he was photographed with his ex, the young American Royal was also snapped getting cozy with a sorority woman that he and Miley both know. Wow. I don’t know where in the world Patrick is now, but I think he’s probably in some sort of dog house. I just hope he’s got a water bowl. What do you make of Patrick’s promiscuous behavior – and his blatant disregard for the past months he’s shared with Miley?

Patrick said that nothing went down with the young sorority woman, but the pics of him and his ex suggest something definitely went down there. Like, some major PDA. he proof is in the pictures, and these pictures definitely scream I’M KISSING ANOTHER GIRL.

Do you believe the young player? Or do you think he’s making his way across the field, and breaking hearts in the process?

Surely, Cyrus won’t believe any stories from Schwarzenegger – she’s a smart cookie and if she suspects anything, she’ll drop him. Cyrus is probably a pretty tough girlfriend – but she also seems like a dedicated one. So she won’t mess around with cheaters. Do you think Cyrus was suffocating Patrick, thus sparking his decision – and desire – to hook up with his ex?

It seems a bit unlikely that Patrick just HAPPENED to be at the same party that his ex was at. Seems like a bit of planning went into this cheating affair. What do you think? Is it just a coincidence that they showed up at the same party? How could this hookup have happened without some planning on their part?

Is Miley Cyrus’s heart the victim in this game of love?