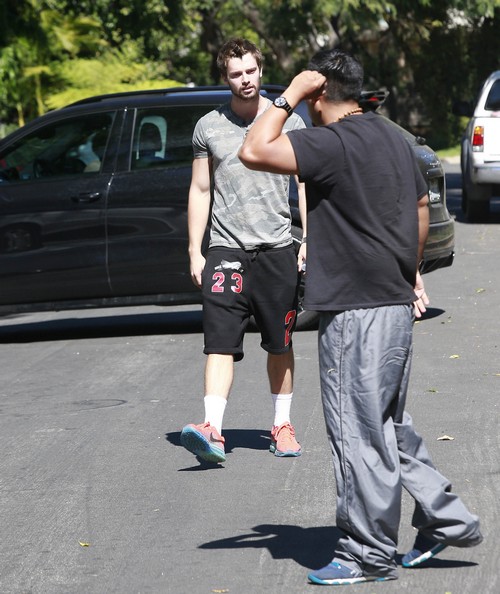 Miley Cyrus and Patrick Schwarzenegger are reportedly in ‘love’, and have even started discussing marriage in front of their friends. The sound you hear? That’s Maria Shriver in a corner somewhere, heave sobbing and keeling. Today Patrick lost his cool and attacked paparazzi putting his aggressive hands on a photog as the photos below show.

According to TMZ, Miley Cyrus has been going out of her way to impress Patrick’s mother, Maria Shriver, in an effort to win her over. She reportedly dresses conservatively and even makes an effort to tone down her wild child antics, although I’m not sure her efforts are really making a solid dent in Maria’s attitude. And even though Miley and Patrick initially began as a hookup and then segued into a fairly casual relationship, they’ve reportedly gotten more serious as the time has gone by.

Honestly, Miley just doesn’t seem like the type of person to do casual relationships very well. She’s had flings and hookups in the past, sure, but when she’s in a relationship, it always tends to become serious. For all of her crazy PR stunts, this is a monogamous girl, and we’ve seen that from her previous relationships as well. She was with Liam Hemsworth for several years and then got ENGAGED to him! Of course she and Patrick are going to be discussing marriage already, especially since the idea of marriage at a young age clearly doesn’t scare her to begin with.

What do you guys think? Are Miley Cyrus and Patrick Schwarzenegger getting more serious, and actually discussing marriage? And do you think Maria Shriver would ever approve? Right now, it still seems like the majority of Patrick’s family looks down on his relationship with Miley, but if this continues, then there’s a chance that Maria and her family will have to get accustomed to seeing Miley around. Of course, don’t expect the engagement or marriage to be a cakewalk for either party, either.

Patrick Schwarzenegger gets aggressive with the paparazzi! Patrick was in full protective mode of his girlfriend Miley Cyrus and did his best to keep photographers from snapping pics of her while she left in her Porsche on March 13, 2014 in Brentwood, California. Patrick blocked shots and even put his hands on a photog to stop him from getting the pics!