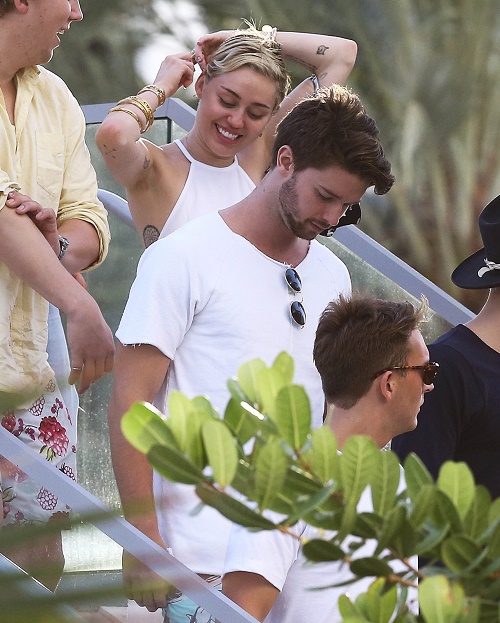 Apparently, Arnold Schwarzenegger, Miley Cyrus, Patrick Schwarzenegger, and Heather Milligan joined Sofia Vergara and Joe Manganiello in Vegas for New Year’s. Who knows what went on during the festivities, but it’s clear that Arnold doesn’t consider Miley the same negative influence that Maria Shriver does. However, Maria Shriver has proven herself to be a caring and careful parent, and how would anyone’s mother feel about their son dating a pop star who’s often spotted smoking pot and getting wasted? And of course our dear old Arnold Schwarzenegger doesn’t care, because he’s probably trying to hit on Miley as we speak.

Anyway, a source told Page Six, “Miley spent the whole holiday season with Patrick, Arnold and Heather Milligan. They spent Christmas and then New Year’s together. Arnold approves of his son’s new relationship, and he was the one who suggested they all spend New Year’s Eve together in Las Vegas.”

Again, ulterior motives? Honestly, I wouldn’t put it past Arnold Schwarzenegger, considering that he kept his own affairs secret for so long. Plus, I’m sure that Arnold’s very public approval of Miley is also just another method to stick it to his ex-wife, who has made her disapproval of her son’s new relationship fairly obvious.

What do you guys think? Is Arnold Schwarzenegger going to try and hit on Miley Cyrus? And if his approval just a way of messing with his ex-wife, Maria Shriver? Let us know your thoughts in the comments below.