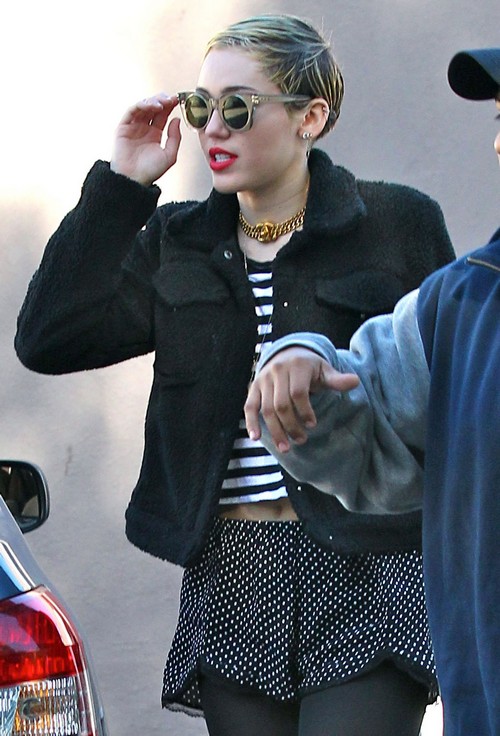 Miley Cyrus has been rumored to be dating Patrick Schwarzenegger for a few weeks now and has just confirmed their relationship status. During the USC Trojan’s football game in Los Angeles on Thursday, the young couple kissed out in the open for the first time. Patrick is the first real relationship that Miley has had since breaking things off with former fiance Liam Hemsworth. Despite looking every bit of the young couple in love, it appears that there is someone out there who doesn’t exactly approve of the pairing – and that’s Patrick’s mother, Maria Shriver. Color us shocked.

While most mothers would be happy that their sons have found a good match, it appears that Maria is “violently” opposed the couple. A source revealed to Radar Online, “They have been hiding it”, but said that the kissing in public “was so orchestrated and so planned to be like, ‘Okay, here you go.'”

Patrick has long since had a crush on the raunchy singer since 2011 and revealed that she was his celebrity crush and that he had his eye on her. Now that they are officially dating, his mother may try to put the kibosh on his plans for love with the former “Hannah Montana” star. He certainly isn’t keeping his romance with Miley a secret and it’s almost as if he’s trying to rub it in his mother’s face.

After learning of his crush on her, Miley reached out to Patrick following his 21st birthday. His mother is said to be “horrified” at the two of them dating – and his sisters are none too pleased as well. Perhaps his family members should try keeping their opinions about his love life to themselves? It’s not like he’s asking them to date her, right?

As a mother, I can see where Maria would be upset – Miley isn’t exactly a great role model and she is a bit raunchy on stage, but Patrick is an adult and is able to make his own decisions. Let’s just hope that she doesn’t turn out to be a bad influence on him.