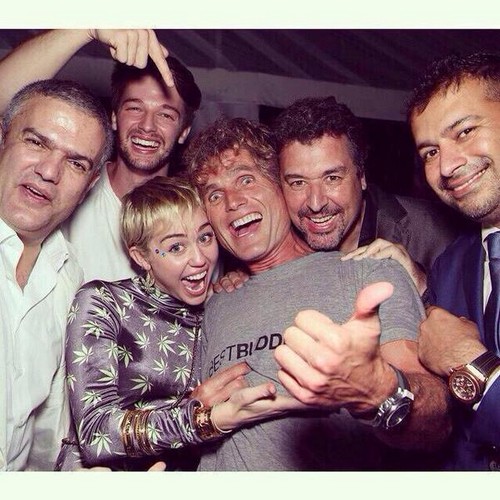 Maria Shriver isn’t exactly happy with Patrick Schwarzenegger’s new girlfriend, Miley Cyrus, largely because of the Kennedy name supposedly getting besmirched – but also because she’s worried about Patrick’s health. Of course pics from Art Basel emerged showing Patrick’s Kennedy uncle, Anthony Shriver, partying it up with the young couple and by the looks of things I think it’s Miley’s parents who should be worried! Of course Miley is likely to get the bad partying rap because that is in fact part of her PR image she has carefully developed .

See, Patrick Schwarzenegger and Miley Cyrus were spotted out and about at Art Basel on the party with friends in Miami. Before that, Patrick and Miley were photographed smoking blunts together, and sources have said that those blunts are actually the least of their worries. So basically, Miley and Patrick have been doing what young people do and partying 24/7, and of course that’s worrying Maria Shriver. Maria was always bent on raising Patrick the right way, with the right upbringing and emphasis on keeping the family name out of trouble. The Kennedy family carries a lot of respect in a lot of circles, and Patrick hanging out with Miley isn’t going to bring the right kind of attention to their family.

Sources are also adding that Maria is worried about Miley’s ‘wild ways’ and her druggie influence on Patrick, considering Miley’s past history. Unfortunately for Miley, her history with drugs, sex, and everything she went through the past four years has been well documented by the media. The price of fame? Perhaps, but now it’s turned Patrick Schwarzenegger into the media’s target, so maybe Maria is right to be worried.

Of course there is more to the story… TMZ claims that sources are reporting to them that Patrick is actually the bad influence on Miley! Their snitches who partied with the couple say that Miley is being stretched to keep up with Patrick – looks like Maria Shriver lives in a big fat glass house!

What do you guys think? Will Miley Cyrus turn Patrick Schwarzenegger into a drug addict, just like she [allegedly] is? Or is he already one? If you smoke weed every day are you a drug addict? Or is everyone over-reacting, and it’s just a young couple having fun and experimenting without any further implications? I mean, both Miley and Patrick are famous, and they’re both incredibly attractive and incredibly wealthy. Trust me, that’s a lethal combination no matter how you put it, even if Maria does everything possible to break them up.