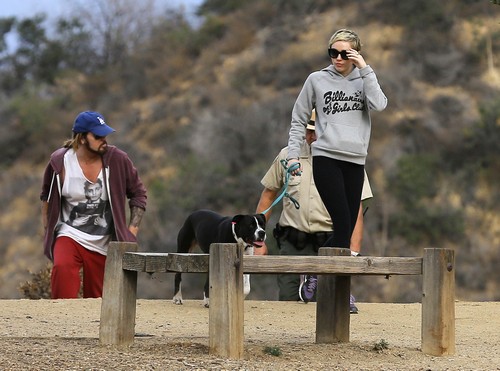 Miley Cyrus seems to have calmed down since her insane Bangerz tour, and she has a new boyfriend, Patrick Schwarzenegger! And, rumor has it they are getting engaged and married! Miley has been dating Patrick Schwarzenegger, son of Arnold Schwarzenegger and Maria Shriver, since October. The couple has been spotted on numerous dates in Los Angeles, and recently were photographed kissing and canoodling at a University of Southern California football game on November 13th.

According to the December 1st edition of Star Magazine, Miley and Patrick’s relationship has been heating up rather quickly. A friend of the couple’s informed the mag, “Miley has slowed down the partying. Patrick’s very healthy – so that has definitely rubbed off on her. Everyone is so excited for them. Their families think they are the cutest couple.”

Sources are reporting that Miley and Patrick are already engaged – and Miley held a dinner at her house with her parents and siblings so that she and Patrick could share the good news with her family and get their blessings. Patrick’s mother Maria Shriver is on board as well and supports the couple. Star reveals that Miley and Patrick attended an event with Shriver on November 12th, the screening of ‘Still Alice’ – a film that Patrick’s mother produced.

So, are you as shocked as we are by Miley and Patrick’s whirlwind romance and engagement? Will the young couple actually make it down the aisle? We saw how nuts Miley went after her relationship with Liam Hemsworth ended, do you think that she will go even crazier if this one falls apart as well? Let us know what you think in the comments below!

Miley Cyrus enjoys a relaxing hike with her dad Billy Ray and her dog at Fryman Park in Studio City, Calfiornia on November 18, 2014. An insider close to Miley and her new boyfriend Patrick Schwarzenegger says that the happy couple are “falling in love with each other.” by FameFlynet