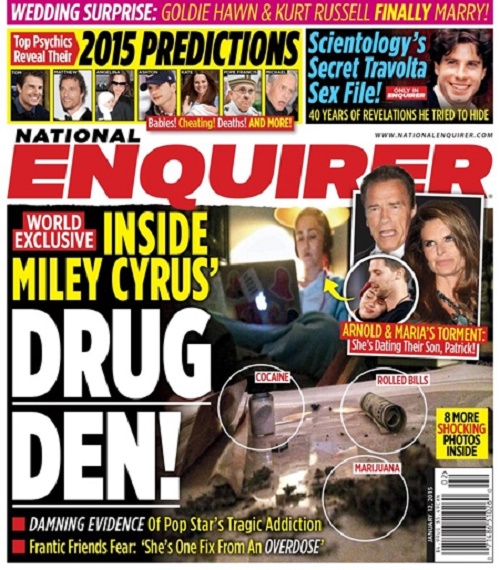 More evidence of Miley Cyrus’ crazy, drug-fueled rockstar lifestyle has surfaced – and she might be on her way to an overdose! Photographs of the pop culture icon’s drug den have made their way into an exclusive report by the National Enquirer, which says, “the 22-year-old binged on marijuana and hallucinogenic mushrooms, and boasted of doing cocaine during a four-hour bender, according to an eyewitness.”

Now, if you are familiar with Miley Cyrus (at all), then you’re probably well aware of the fact that she’s not shy about her extracurricular activities, especially when it comes to her experimentation with substances. Just listen to her songs. Just take a peek at her Instagram account, which often feature trippy pictures laden with references to drug culture. So is Miley really as big a druggy as this article states, and is she slowly headed towards a downward spiral that will end her career and, eventually, lead her to rehab?

The magazine’s headline reads, “Inside Miley Cyrus’ Drug Den! Damning evidence of pop stars’ tragic addiction.” One line also states that her friends are very worried that she’s “one fix away from an overdose.” Check out the magazine for more details and to see the pictures for yourself. While these photos very well could be a representation of what one might find in Miley’s hazy drug lair, it might be wise to take this report with a small grain of salt. But who knows?

What do you make of these claims? Is Miley a hardcore drug addict who needs immediate attention before she gets out of control? Leave your thoughts in the comments below!