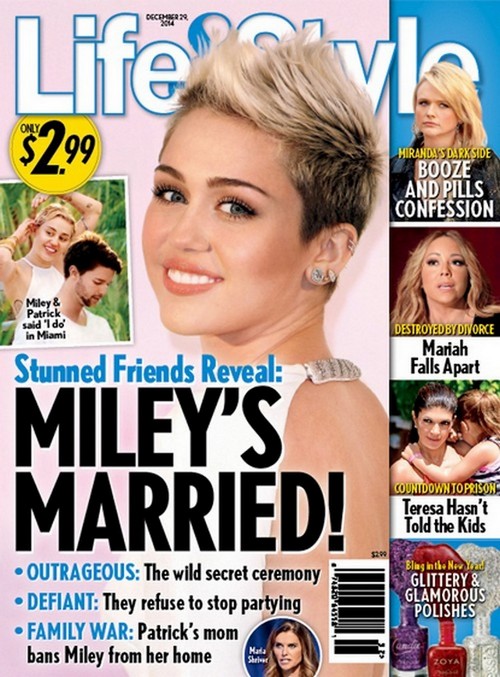 Miley Cyrus is married! exclaims the cover of the latest cover of “Life & Style” magazine. Stunned pals of the former “Hannah Montana” star have revealed that Miley Cyrus has said “I do” to her boyfriend Patrick Schwarzenegger in a secret wedding ceremony in Miami, Florida. Sadly there is no photo to corroberrate this story.

So that’s what they’ve been doing down there….not just attending and/or performing at Art Basel, but apparently there was more to it than that. This goes right along with the reports that Miley is pregnant by Patrick!

Miley and Patrick haven’t been dating for too long, but stranger things have happened in Tinseltown. Certainly it is not out of the realm of possibility that Miley and Patrick decided to get married after a pregnancy test proved that she was indeed expecting their first baby.

Snitches close to the situation have revealed that Miley and Patrick wed recently in Miami and that the ceremony was wild and secret. In fact, the magazine says that despite being pregnant with his baby, Miley can’t seem to stop partying it up whatsoever. Does she not care that her baby is going to be born with problems if she doesn’t give up the booze and/or drugs and partying? She’s old enough to know better, that’s for sure.

That is basically why it all makes sense that Maria Shriver has banned Miley Cyrus from her family’s home. She doesn’t want some party happy sex fiend embarrassing her and her family by being at the family home. She doesn’t want Billy Ray’s hillbilly daughter around the classy Kennedy family. It was bad enough that she had to endure the drama as a result of her husband’s cheating, but to have this young trollop around the family? It could prove to be an embarrassment for all concerned. Patrick doesn’t care because all they do is have sex and that is okay by him.