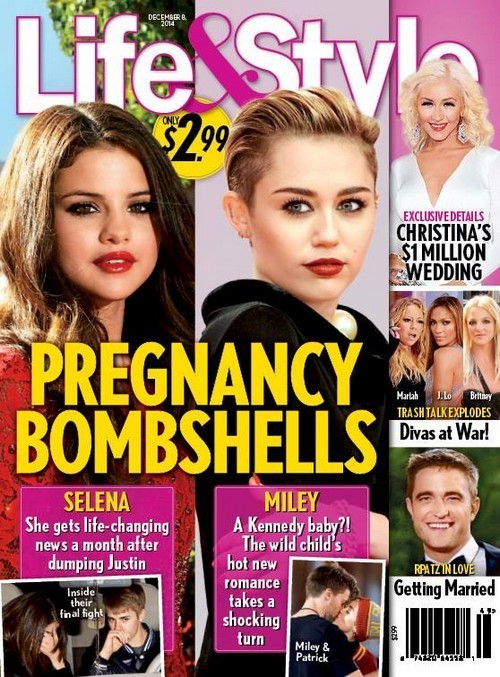 Maria Shriver and the entire Kennedy family are probably collectively freaking out after getting this report, even though the likelihood if it being accurate is less than 5%. According to the latest cover issue of Life & Style, Miley Cyrus and Selena Gomez are pregnant, Miley with Patrick Schwarzenegger, and Selena with [who else] Justin Bieber.

Life & Style’s source claims that Miley Cyrus is ready to become a mom at the ripe old age of 22. The same source adds, “In late October, she mentioned that her period was late. She took two pregnancy tests. One came back negative — and the other came back positive. Friends are convinced she’s in the early stages of pregnancy.”

However, Miley allegedly hasn’t told Patrick or his family the big news yet, even though she supposedly ‘loves’ the idea of having a Kennedy baby. Right. Well, let’s just assume that Miley can even have a baby at this point, after all the weird things she’s been doing to her body in the past two years. Do you really believe that the Kennedys would allow such a pregnancy to go through? That family wasn’t happy with goody-two shoes Taylor Swift, so imagine their expressions if Patrick Schwarzenegger suddenly started raising a child with Miley Cyrus.

Now, even though Miley Cyrus’ pregnancy was the big topic on the cover issue, Selena Gomez’s pregnancy is also touched upon. But you know, nobody wants to hear about the spawn of Justin Bieber. One Justin Bieber is bad enough, thankyouverymuch.

Other than that, Christina Aguilera apparently had a $1 million wedding, and Robert Pattinson is getting married to his new girlfriend, FKA Twigs.That poor guy is so clueless and gullible, he’ll end up as FKA Twigs’ bitch if he doesn’t re-assert his dominance soon.

Update: Miley’s rep has denied that she is pregnant. Huge surprise, NOT.