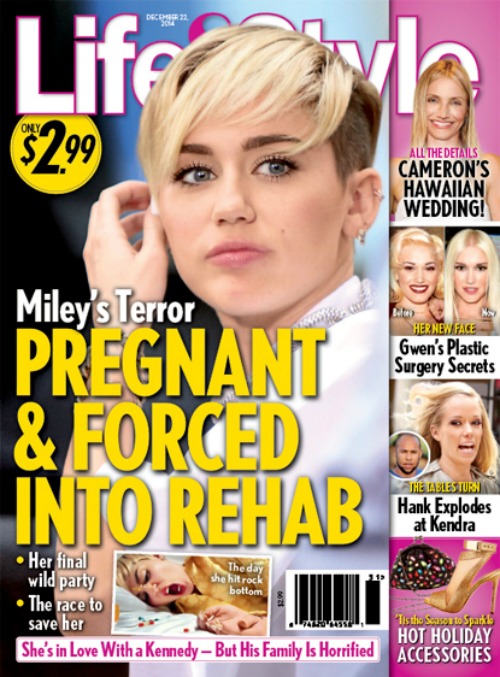 Miley Cyrus is pregnant and has been forced into rehab, according to the latest cover of “Life & Style” magazine. Miley has been dating Patrick Schwarzenegger and her antics have angered his mother Maria Shriver. What would anger her more than getting knocked up out of wedlock by her son?!?

The tabloid reports that Miley is in deep trouble with her addiction issues and has been forced into rehab to deal with her problems. The magazine has the scoop on Miley’s final wild party, along with her family and friends’ race to save her before it’s too late. Miley has obviously hit rock bottom with her stage and private party antics.

She showed up to Art Basel in Miami wearing a silver glitter wig and silver colored pasties. She also smoked pot on the stage, thus angering her boyfriend Patrick. Maria Shriver already had it out for Miley and this pregnancy and rehab trip might just be the icing on the cake.

There are pictures in this issue of how Miley Cyrus finally hit rock bottom and she is obviously surrounded by pills. She is in love with a Kennedy, but his family is like American royalty and they are all mortified at the idea of Patrick Schwarzenegger and Miley Cyrus becoming serious. It appears that it’s too late to hope that they don’t get any more serious than having a baby together.

A source told the publication, “Her period is late. Miley gave up drinking and smoking pot for a few weeks because of it, but she’s having a hard time saying ‘No.’ Some people believe that she’d need professional help to stay sober for nine months.” Seriously, Miley was pregnant (NOT) last week, is she with child again already?

It’s not hard to wonder why she would need professional help – she is a total mess and everyone on the planet knows it. Poor Maria Shriver, she has our sympathies for this drama.