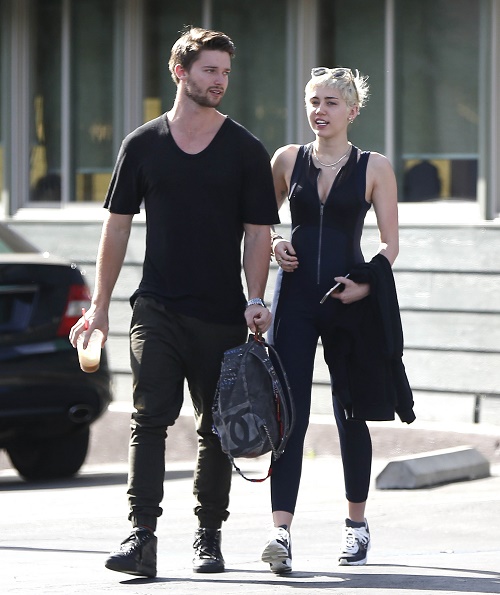 Miley Cyrus has finally found love…and pizza and Twinkies. Miley Cyrus and Patrick Schwarzenegger shocked us all when they began dating in 2014, it seemed like the strangest couple ever. However, as the months went by it became clear that the toking twenty-somethings were really perfect for each other, and had much more in common than any of us ever realized. According to new reports, both Miley and Patrick have packed on at least ten pounds a piece since they began dating – and lying in bed together for hours with the munchies.

The February 16th edition of OK! Magazine reveals, “The couple’s favorite thing to do together is lounge in bed until the wee hours of the morning bingeing on junk food – and it shows! They have each packed on 10 pounds! Miley was bone thin during her Bangerz tour last year and seems to be relishing a chance to relax and let loose. Sources say that she is thrilled to be with a guy who is as carefree as she is. A pal of Patrick and Miley’s dished to OK! Magazine that the couple’s favorite snacks were pizza, oreos, and In-N-Out Burgers and gushed that “Miley’s not bothered by Patrick’s pooch, she actually finds it sexy!”

Miley Cyrus’s wild partying and crazy work schedule, coupled with her deteriorating frame and erratic behavior in 2014 had us all worried. Right now the Bangerz star seems to be the happiest and healthiest that she has ever been. And the couple that eats together (or binges on Oreos at 3:00 AM), stays together. What do you think of Miley’s new curves? Do you think she looks better than she did before, or should she start reeling her diet in and hitting the gym? What about Patrick – is he getting a little too big for his britches? Let us know what you think in the comments below!