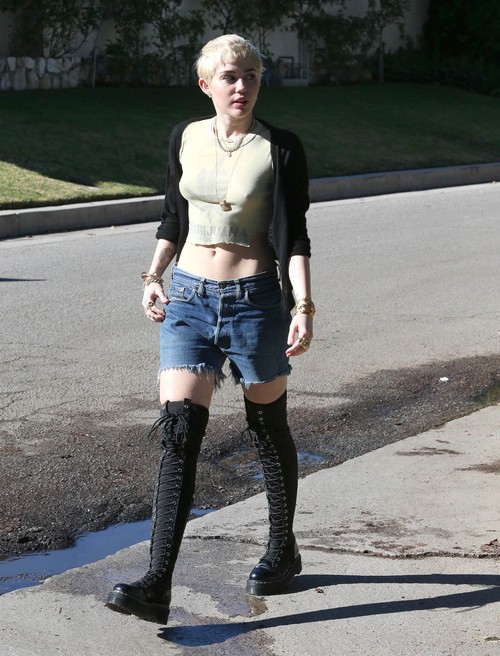 A source tells Naughty Gossip, “This is going to end is disaster. Poor Patrick’s mom doesn’t know what to do.” Poor Patrick’s mom, a.k.a. Maria Shriver, has already been losing her head at her precious baby son dating Hollywood’s most notorious singer and party girl. In her mind, Patrick is already being corrupted by all the Hollywood-ness that Miley is surrounding him with, not to mention the drugs, the drinking, and the excessive partying. However, Patrick Schwarzenegger is a grown up boy, and despite being part of the Kennedy legacy, he’s going to do whatever he wants – and so, apparently, is his sister.

The whole situation is a bit strange, but not that unusual – especially in these parts, where these famous people only mingle with other famous people and their families. We know that Miley Cyrus and Patrick Schwarzenegger met in November, and Braison and Christina apparently started hooking up a month later. Again, their poor parents… geez.

Well, no, I take that back. Miley’s and Braison’s parents have clearly stopped caring about what their children are doing in their free time, and we know old Arnie [a.k.a. the governator a.k.a. Arnold Schwarzenegger] could give a crap. But Maria Shriver really must be losing her mind – first she loses her son to the Cyrus family, and now she loses her daughter as well? It’s enough to make any mother crazy, much less someone who’s had to deal with a philandering husband and the legacy and pressure coming from the Kennedy family name.

What do you guys think about Miley Cyrus’ brother dating Patrick Schwarzenegger’s sister? Let us know your thoughts in the comments below.