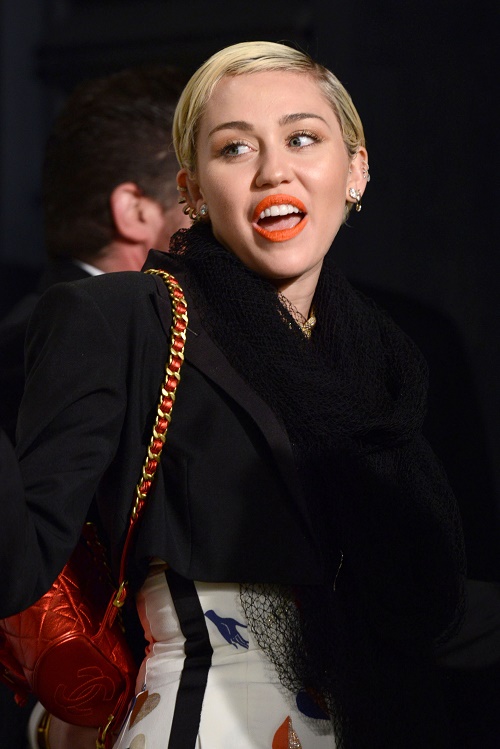 Miley Cyrus throws a bit of shade at Patrick Schwarzenegger after his alleged cheating scandal! Who would have thought that we would be here feeling sorry for Miley Cyrus? Despite all her crazy public antics, this girl is clearly a monogamist at heart – but unfortunately, her boyfriends never seem like they’re on the same page as her. First, she gets engaged to Liam Hemsworth, only to have him cheat on her [very publicly] during awards season. They break up, Miley waits more than a year, and then you think she’s finally found another steady boyfriend in Patrick Schwarzenegger.

And Patrick Schwarzenegger, for all intents and purposes, is straight-edged, right? He’s a Kennedy, he’s Maria Shriver’s son, and all his partying is supposedly because of Miley’s bad, bad influence. However, we’re starting to see that that’s not true, and that Patrick might actually be more of a partier than Miley. Plus, it seems like he’s definitely got some of his father’s genes, at least when it comes to how he treats the women in his life.

By now, everyone’s heard of Patrick’s intimate and cozy pictures with a mystery brunette while on his Spring Break vacation, right? Patrick’s already denied cheating on Miley, claiming that the brunette was a friend’s girlfriend. Correct me if I’m wrong, but I don’t think you snuggle like that with your friend’s girlfriend…

Anyway, we haven’t heard directly from Miley regarding her thoughts on the cheating scandal, but she did end up posting several quotes on her Instagram. One such quote read, “Don’t you ever let someone treat you like a yellow Starburst. You are a pink Starburst.”

Hmm… think she’s referring to anything in particular, i.e. her boyfriend cheating on her, thus treating her like a ‘yellow starburst’. Or was she just drunk and/or stoned, and rambling about nonsense?