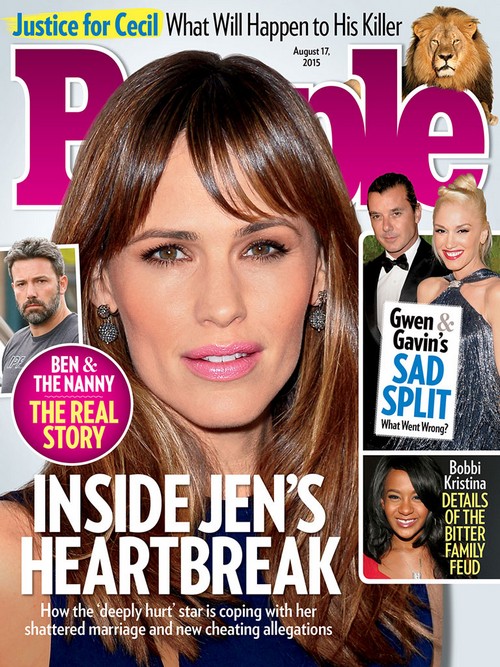 Ben Affleck’s team continues to deny that he was cheating on his wife Jennifer Garner with their nanny Christina Ouzounian, but pictures don’t lie. This week’s edition of People Magazine features an exclusive photograph that was snapped of Ben and the infamous nanny Ouzounian on July 17 outside of Ben Affleck’s rental home in Los Angeles. Ben’s three kids were nowhere in sight, so there really is no reason for his nanny to even be at his house – except for the obvious, that they were having an affair. The picture of the two lovers was snapped just two weeks after Jennifer Garner and Ben Affleck confirmed their divorce.

According to People Magazine’s sources, Ben Affleck was cheating on Jennifer Garner with his nanny Ouzounian for nearly a year – and it was pretty serious. Christina has been bragging to all of her friends that she is “in love” with the actor. Rumor has it that Jennifer Garner caught Ben Affleck with the nanny while they were on a family vacation with their three kids, Seraphina, Samuel, and Violet.

Ben Affleck’s rep vehemently denies the cheating allegations, and insists that Christina Ouzounian and Ben Affleck were nothing more than “just friends,” and had a “professional relationship.” But, it’s not looking good for Ben – not only was he caught in a photo canoodling with Christina outside of his home, when his kids weren’t there. But, Christina was also photographed slipping in to the back entrance of Bel-Air Hotel where she claims she used to meet up with the married actor. Jennifer Garner’s rep has not acknowledges the cheating rumors, which just lead us all to assume that they are true. And, her pals told People Magazine that the actress is “devastated” over Ben’s affair.

Do you believe that Christine Ouzounian was having an affair with Ben Affleck? Or is she just a fame-hungry gold-digger trying to cash in on the scandal? Let us know what you think in the comments below!