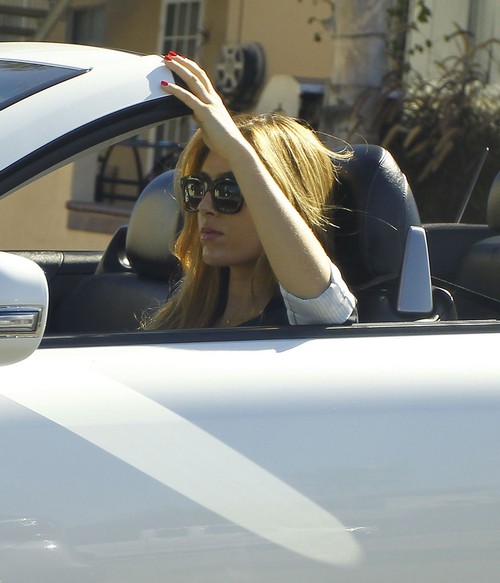 Despite the photo evidence, Ben Affleck and Jennifer Garner’s reps continue to play the lying game about the affair even as it looks less likely that their divorce will be as amicable as their press statements would lead us to believe. And it may get even nastier once Christine Ouzounian lands a juicy book deal. A source told Life & Style magazine that Christine Ouzounian has been quietly shopping her story around, and Ben Affleck and his soon to be ex Jen Garner can’t be happy about that.

Could it be that Christine Ouzounian is holding the prospect of a tell-all over Ben’s head? Insiders says that Christine is convinced she and Ben Affleck have a real romance going and she could end up being his next wife as soon as his split from Jennifer Garner is official. She likes their three kids Violet, Seraphina and Samuel and the kids seem to like her too. The firing came not because Christine wasn’t getting along with the kids but because Jennifer Garner suspected Ben and Christine were carrying on.

Odds are if Ben decides to keep Christine on as his girlfriend, the book deal will go away because she’ll get far more from being Affleck’s honey. But if Ben tells the nanny the relationship is a no-go, expect a very public exposure of his cheating – whether Christine Ouzounian gets a publishing deal or not. Christine has made it clear to Ben’s handlers that she is going to do what she wants and that she can prove they’ve been having an affair.

So what does Christine Ouzounian have on Ben Affleck? Photos? Love notes? Ben’s a smart guy but the world is full of smart men led astray by their naughty bits, so there’s really no telling what evidence he may have left in her hands. One thing is clear, if Christine Ouzounian tries to push Ben around, that’s a sure-fire way to end their new relationship before it begins. Ben’s unloading Jennifer Garner because he can’t deal with her controlling and bossy ways anymore so he can’t want more of that.

Ben is caught in a tough spot here. He’s been lying to Jennifer Garner about shagging the nanny, but there’s photo proof that the Christine Ouzounian has been hanging out at Affleck’s new LA apartment. Maybe that’s why Ben’s been in Atlanta with Jennifer Garner and the kids so much – he’s trying to do damage control. What’s interesting is that despite the denials, Affleck smuggled Christine Ouzounian on board his private jet and took her to Vegas for a recent poker tournament he hosted.

The good news is, if Ben and the nanny don’t work out their romance, at least he’s giving her more material for her scandalous tell-all book!

Former nanny Christine Ouzounian gets a police escort from her house in Santa Monica, California on August 12, 2015. Christine got the police to follow her all the way down to her parents house in Newport Beach. Despite being fired from her job by Jennifer Garner, Christine doesn’t seem to have any problems with money as she got a new car and has been staying at the Hotel Bel-Air, where rooms are $1000 a night. FameFlynet