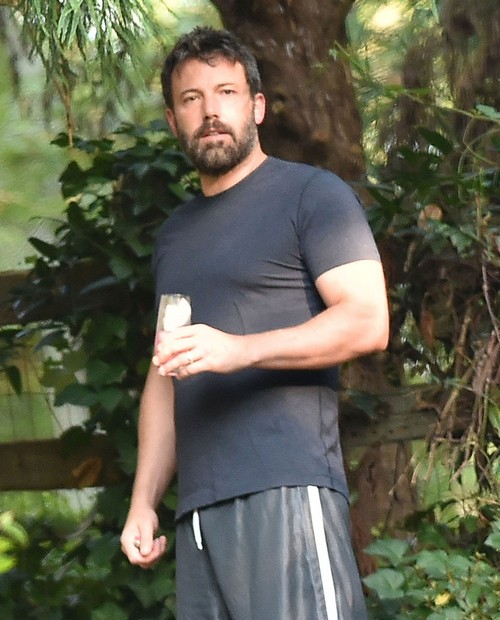 It looks like Ben Affleck and Jennifer Garner’s lusty nanny Christine Ouzounian isn’t just trying to bed the Oscar winner, but wants a little Ben bun in her oven. Pregnant! And why not? The nanny-to-wife route has worked out well for a number of Hollywood second (and third or fourth) wives, so it seems a valid approach for a gold digging, social climber to shoot for.

Who is Christine Ouzounian? Still in her 20s, Christine Ouzounian seems to be a typical California girl. She has a twin sister named Caty and attended Arizona State before starting up a career in real estate that flopped when the property market tanked. That’s when Christine opted to give nannying a try to make ends meet. She came to work for Jennifer Garner and Ben Affleck this spring and that’s just when their marriage began to unravel. The question is whether Christine Ouzounian took the job with Ben and Jen because she was targeting Ben or if the attraction grew naturally.

Did Christine Ouzounian break up the Afflecks? To be fair, the problems between Jennifer Garner and Ben Affleck began long before Christine Ouzounian came along. In fact, Jennifer knew what she was getting with Ben, but did that dumb woman thing where we think we can change a man to make him what we want (you can’t). Ben was a notorious drinker and gambler before Jennifer reeled him in, so it should be no surprise that he continued down that path. And for Ben, Jennifer’s controlling ways drove him deeper into these dark interests as he became annoyed with her micro-managing.

What turns Ben Affleck on about Christine Ouzounian? Well, for one, he likely gets to be the man in the relationship. Jennifer Garner is notorious for her persnickety and bossy ways and Christine is much more likely to let Ben drive their relationship. Christine is reportedly much more laid back than the uber-tense Garner and will let him be his own man. It makes sense as Ben Affleck is holding all the cards – he’s got the money, fame and lavish lifestyle the naughty nanny wants for her own so this gives him the power position in the relationship. This is in stark contrast to Garner who is just as powerful and wealthy as her wayward hubby.

So how long before we see a Ben Affleck-Christine Ouzounian pregnancy announcement? Despite the denials of the Affleck-Garner press machine, photos from just a few days ago indicate that Ben Affleck is romancing Christine Ouzounian. They were photographed laughing it up with a bottle of champagne outside his place just after her firing. And why would the nanny be all smiles after getting her pink slip? It’s because she walked out of the house with what she wanted – Ben’s full attention. Rumor has it that Christine is doing all she can to keep Ben’s attention and has blabbed to friends that she’ll be the next Mrs Affleck as soon as the divorce is a done deal and says the Affleck kids still love her – but a pregnancy announcement may come long before the I do’s are a done deal – if the nanny gets her way.

Christine Ouzounian will join the ranks of many other Hollywood nanny-wives. Robin Williams cheated on his first wife with their nanny Marsha Garces then wed the nanny and they stayed hitched for two decades. Jude Law famously wrecked his marriage to Sadie Frost by cheating with Sienna Miller and then cheated on her with the nanny Daisy Wright, although he didn’t wed the keeper of his kids. Uma Thurman kicked Ethan Hawke to the curb after he began an affair with their nanny Ryan Shawhughes whom he later married. And Arnold Schwarzenegger knocked up his maid/nanny Patty Baena and let her and the look-alike kid continue to hang around the house for years before he admitted to the affair – Arnold and Maria Shriver are now divorced.

Stay tuned on this one folks – it’s protocol for celebrities to deny the truth – so for Ben Affleck and Jennifer Garner to deny his affair with Christine Ouzounian is not surprising. Let’s just wait and watch for a baby bump and quicky wedding – followed by Jennifer Garner’s head exploding. The truth will come out!

Despite a looming divorce Jennifer Garner is spotted wearing her wedding ring while shopping with her daughter Violet in Atlanta, Georgia on August 9, 2015.

Ben Affleck shows the obvious signs of stress as he walks outside the family’s rented house in Atlanta, Georgia on August 9, 2015. Jen Garner arrived from her hotel earlier in the morning to pick up Violet and stayed for only ten minutes before abruptly leaving. Shortly after, Ben looked exhausted as he paced the grounds outside his house – also some pics of the ex-nanny heading to the Bel-Air Hotel where she was allegedly meeting Ben 10 days ago. FameFlynet