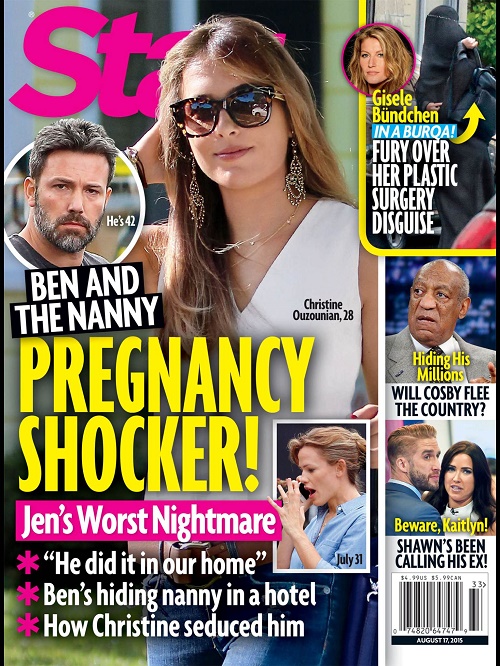 Is Christine Ouzounian, Ben Affleck’s mistress and former nanny, pregnant with his baby? When Ben Affleck and Jennifer Garner confirmed their divorce, we all knew it was only a matter of time before it was revealed that Ben had been cheating again and that is why his wife of a decade filed for divorce. But no one expected it to be with their nanny Christine Ouzounian! Ben has been vehemently denying his affair with their nanny, but he is going to have a tough time keeping up the charade – because she is reportedly pregnant!

This week’s cover of Star Magazine features a photo of Ben Affleck and Christine Ouzounian, the headline screams, “Ben And The Nanny Pregnancy Shocker: Jen’s Worst Nightmare!” According to one of Star Magazine’s inside sources close to the scandal, “Ben is petrified that she might be pregnant. He is sweating beyond belief right now and wishing he had never gotten involved with her in the first place. She has been bragging about their relationship, her friends say that she has delusions about being his wife.”

Ben Affleck is stuck between a rock and a hard place right now, if he doesn’t keep Christina Ouzounian close by, then she is going to tell the world every detail about their cheating and affair. But, if he remains in contact with her and keeps getting photographed with her, he is basically confirming the cheating allegations are true any way.

According to Star Magazine, Ben chose the wrong woman to make his mistress and possibly get pregnant – she seems to have gone “Fatal Attraction” on him, and he believes she is the one who leaked the stories about their affair to the press to begin with. The insider explained, “Christine was hoping he would go public with their relationship. Those close to her suspect she told the press her story. They say that she wants it out there so people will think that Ben chose her over Jen.”

Have you been following the Ben Affleck cheating scandal? Do you think his suspicions are correct, and his mistress is pregnant with his baby? If Ben doesn’t keep up his affair with Christine Ouzounian, what do you think she will do? Does she seem a little bit crazy to you? Let us know what you think in the comments below!