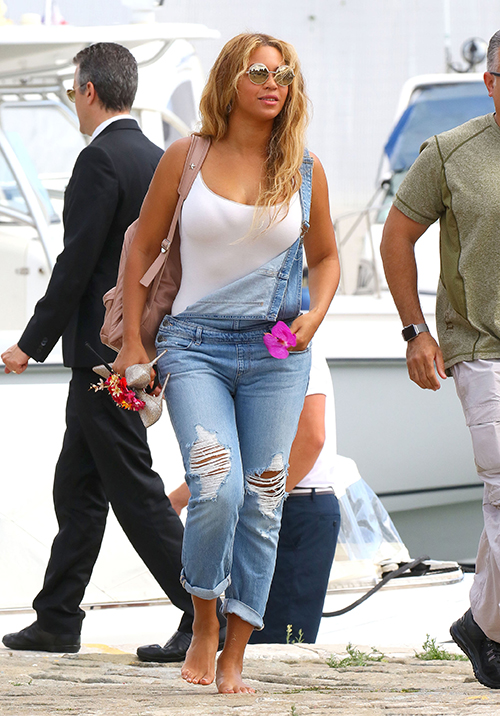 Despite Beyonce and Jay-Z’s desperate attempts to kill the divorce rumors that have been plaguing them for years, the fact that their marriage is basically a business arrangement and there is nothing happy about it is out there. And it’s not going away. Why? Because, according to a new tell-all book titled Becoming Beyonce by J. Randy Taraborrelli, Bey and Jay have actually secretly broken up in the past, and it was all over his alleged affair with Rihanna!

Becoming Beyonce won’t hit the bookstores until October 27th, but Radar Online got an exclusive look at Taraborrelli’s tell-all book – and it seems to be filled with one bombshell after another. In his tell-all, Taraborrelli reveals that Beyonce and Jay-Z secretly broke up in 2005, because Bey wanted to focus on her career and her husband was feeling neglected. Eventually, they agreed to take a break. During that time, Jay-Z began working with up-and-coming singer Rihanna, and it wasn’t long before Beyonce was certain that he was cheating with her.

Here’s where it gets really interesting. According to Taraborrelli, there is a good chance Jay-Z never actually hooked up with 17-year-old Rihanna. A member of his team confessed that they sold the stories to the press to help get Rihanna more exposure and make her a household name. Beyonce, like everyone else, believed the rumors though – and had no idea they were planted in the press by her husband’s own employees.

Radar goes on to reveal that in Becoming Beyonce Taraborrell confirms that Jay-Z was able to win the singer back in 2006, and despite tying the knot in 2008, Bey never really got over the whole Rihanna scandal. And, in the infamous elevator smack-down in 2014, it all supposedly started because Jay-Z wanted to go to a party hosted by Rihanna and Beyonce and Solange were not having it.

As crazy as Taraborrelli’s tell-all sounds, it all actually makes sense and the timelines line up perfectly. The only gray area is whether or not Jay-Z actually cheated on Rihanna. His employees insist they planted the story in the press and started the rumors themselves – but who is to say they aren’t just lying to protect their boss? What do you guys think? Share your thoughts in the comments below!