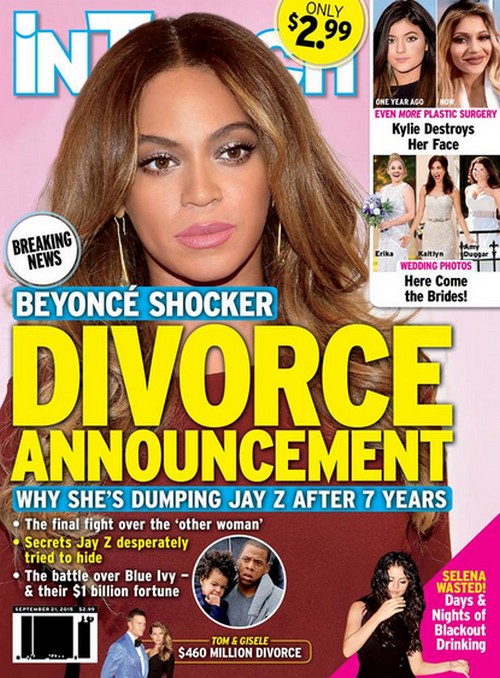 According to In Touch Weekly, Beyonce and Jay Z are headed for a billion dollar divorce debacle any day now. Even if you’re doubtful about tabloid cover stories, there is mounting evidence that a break-up may be looming between the two singers. Let’s dig into the dirt and see why the rumors may be true and the power couple may be headed for a power divorce.

First, a couple of months ago, Beyonce bought a massive New Orleans mansion on her own, no Jay Z on the title. Could this be her new bachelorette pad? Sister Solange Knowles lives in NOLA, so this makes sense.

Second, there’s the infamous Solange Knowles elevator attack on Jay Z. What else could that have been about except for some sort of insult to her sister Beyonce? Rumors flew after the brawl was spotted on security cameras.

Third, Beyonce and Jay Z have been spotted out and about for months without their wedding rings. Also, Beyonce reportedly had her third finger wedding tattoo removed – it was IV, their wedding date. That’s not a good sign.

Fourth, Beyonce hasn’t sat for an interview in more than a year and a half. That has people wondering why she’s avoiding the press. Beyonce even covered Vogue while refusing a sit-down with the prestigious fashion magazine.

Fifth, Beyonce and Jay Z skipped out on the MTV VMAs this year – reportedly because they were arguing – even though the 2014 MTV VMAs were a family affair. Rumor has it Jay Z suggested they show up but Beyonce told him no way.

Finally, their relationship has been plagued with cheating rumors. Jay Z has allegedly kept up a single type lifestyle throughout their relationship. According to the tabloid, Beyonce demanded to see Jay Z’s phone recently and he wouldn’t let her, which resulted in another knock down drag out.

Jay Z also has to testify next month in a sampling lawsuit against he and Timbaland over their hit Big Pimpin’. Hova asked for his finances to be excluded – the request said that his wealth is irrelevant to possible copyright infringement. But In Touch Weekly alleges that Jay Z doesn’t want to discuss his finances in court because that will reveal to Beyonce money that Jay Z has been spending on other women.

Doubters say the duo acting lovey dovey in public is evidence that all is good in Jay and Bey land – but we all know that celebrities deny as long as they can and then make divorce announcements when it best serves their careers. Jay Z and Beyonce may be waiting until his copyright lawsuit is done before they announce.

Rumor has it they are basically living apart and have separate lives – and the only time they are together are for well-timed pics that Beyonce posts to Instagram to keep up the ruse that they duo are still happily paired. We’ll see… Stay tuned to CDL for more on the possible Beyonce and Jay Z split (and word about his alleged legion of other women!).