Beyonce Divorce Update: NOT Caught Cheating On Jay-Z With Another Man At Coachella – David Guetta Just a Friend? 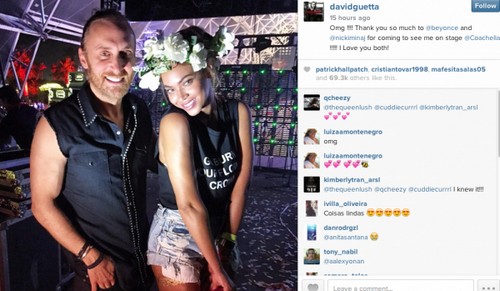 Beyonce and Jay-Z have had a tumultuous marriage for the past few years, but it wasn’t until Solange’s elevator drama that the whole world knew about it and the divorce rumors started. Since then, it’s been nothing but cheating rumors, divorce rumors, fighting rumors, and rumors about Jay-Z’s alleged love child. The latest rumor? That Beyonce had cheated on Jay-Z with David Guetta at the Coachella Music festival this past week.

However, a source tells Naughty Gossip that Beyonce and David Guetta did NOT hook up, explaining, “Beyoncé was backstage and hanging out with the multi-millionaire but they are just friends. If she were going to have an affair, which she isn’t, it wouldn’t be backstage at a huge public event.”

David Guetta made a point to thank Beyonce for coming and watching his set, but then again, he also thanked Nicki Minaj – who he’s definitely not hooking up with.

These types of rumors get started quickly, especially if someone manages to see a flirtatious glance or touch. And given what we know of Beyonce’s and Jay-Z’s marriage issues, I wouldn’t be surprised if Beyonce was flirting with every eligible bachelor she came into contact with. I mean, Beyonce and Jay-Z more or less had an open relationship for much of their marriage, so who’s to say that they’re not continuing that arrangement now?

However, I doubt Jay-Z would be pleased if he found out that Beyonce was openly flirting with other men – if only to protect their image. The divorce rumors only just recently started to die down, but they’re already picking up steam after the Beyonce and David Guetta cheating rumor went public.