Beyonce and Jay-Z’s Elevator Fight With Solange: Rihanna Caused It? 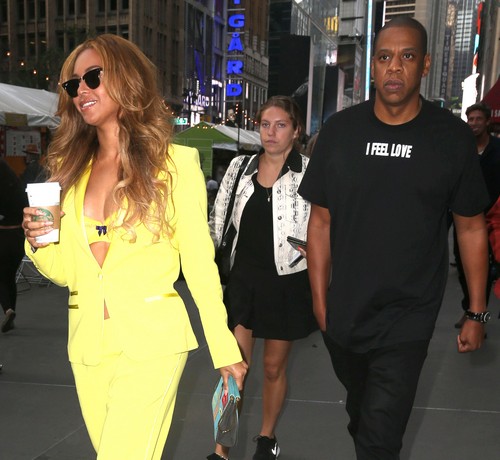 What really happened during the infamous 2014 elevator smack-down between Beyonce’s sister Solange and Jay-Z after the 2014 Met Gala has remained a mystery for over a year – until now. A new tell-all book titled “Becoming Beyonce: The Untold Story” is set to his stores this month, and everyone is buzzing about some of the shocking revelations made by author J. Randy Taraborrelli – including the claim that the reason behind Solange and Jay-Z’s fight in the elevator was none other than Rihanna!

According to the National Enquirer, who received some excerpts from the shocking book before it hit stores – Solange attacked Jay-Z in the elevator because he announced that he was heading to an after-party hosted by Rihanna.

Taraborrelli reveals in “Becoming Beyonce” that back when Rihanna’s career was first taking off – a member of Jay-Z’s team leaked stories to the press that Rihanna and Jay were hooking up to help boost her record sales. Unfortunately, no one included Bey in the plan – so when she heard the rumors, she thought they were true. Ever since then, Rihanna has been a sore subject for the couple.

The tabloid’s sources reveal that Beyonce “laid down the law,” but it was her sister Solange that is a “strong woman” and stood up for what was right that night in the elevator. The insider dished, “If you want to talk about a powerful woman not allowing herself to be shut down by a man, well that’s Solange.”

Since the surveillance video of the brawl between Solange and Jay-Z was leaked over a year ago, there have been dozens of theories about what really went down that night between Bey’s husband and sister. This is actually one of the more logical ones – and it could really be the truth. Sadly, Bey and Jay are never going to confirm or deny what really happened … so we will always wonder.

What do you guys think? Could Beyonce and Solange have been upset because Jay-Z wanted to go to Rihanna’s party? Share your thoughts in the comments below!