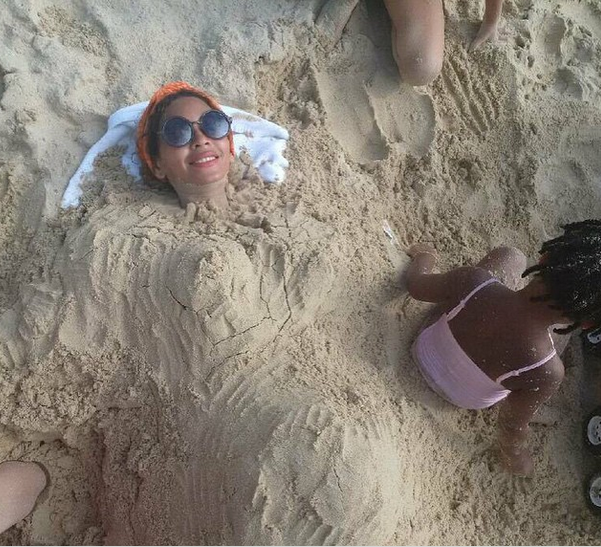 Is Beyonce pregnant with baby number two? Well, if she isn’t having another baby with her husband Jay-Z, then she certainly wants people to think that she is. Beyonce took to Instagram on Sunday January 11 and posted a pregnant looking photo of herself at the beach with Blue Ivy and a baby bump. However, Bey wasn’t posing in her typical photo-shopped bikini pics. In the Instagram post Beyonce is laying buried in sand from head to toe – with a huge baby bump molded in sand over her stomach. The singer’s fans are currently in a frenzy on social media, interpreting the new picture as a pregnancy announcement. Naturally, Beyonce isn’t correcting them if they are wrong.

2014 was a tumultuous year for Beyonce and Jay-Z, and the power couple were plagued with divorce rumors (some started by Beyonce herself) for the majority of the past 12 months. However, as soon as their joint tour ended – sources revealed to the tabloids that Beyonce and Jay-Z were trying to get pregnant with baby number two, because Jay thought it would save their marriage and he wanted them to be as close as they were when Blue Ivy was born. Ironically, right after the pregnancy rumors began floating around, Beyonce was spotted at a basketball game with her hubby – and what looked like a baby bump in December 2014. So, it is no coincidence that less than a month later the singer took to Instagram and posted a photo of herself on the beach with a baby bump made out of sand.

But, that doesn’t necessarily mean Beyonce is pregnant. She may just be feeding in to tabloid rumors to keep the momentum going, which she has been known to do in the past. Regardless of whether Beyonce is pregnant, or is just pretending she is to break the internet, one thing is for sure – Kim Kardashian probably just let out a glass-shattering scream that could be heard across the entire West Coast. Beyonce’s nemesis and rival has been publicly undergoing IVF treatments because she and Kanye are having a tough time getting pregnant naturally, the last thing she needs is Bey beating her to baby number two.