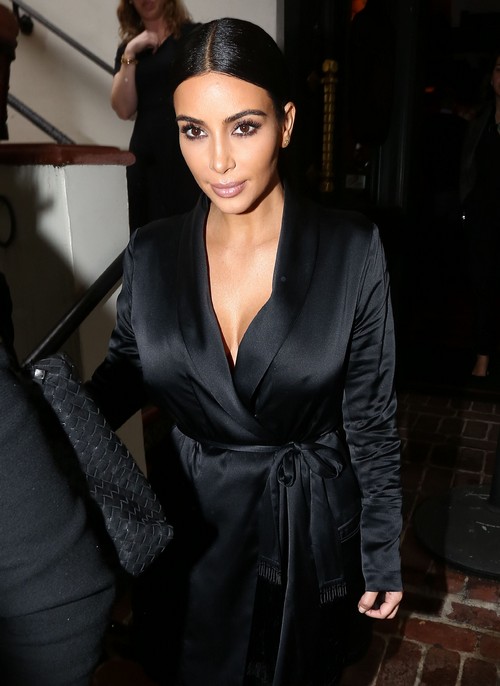 Kim Kardashian is preparing for divorce from Kanye West and planing her reality TV future by staging arguments with her sisters to break away from KUWTK and get her own show after the split. Kim Kardashian had fans of Keeping Up With The Kardashians in a tizzy after a preview of an upcoming episode showed Kim shaming sister Kourtney Kardashian by claiming she “bought her a career,” but little did fans know that the diss was purposely written into the episode to make it seem as though the sisters are turning on one another, leading into Kim Kardashian getting her own show, while some spinoffs are in the works as well.

As just about everyone knows by now, Keeping Up With The Kardashians is scripted, and every move the family makes has a hidden agenda attached to it. Kim and momager Kris Jenner are the most conniving of all and are always scheming. Kris and Kim know KUWTK doesn’t have much staying power with all the family wanting to go in separate directions. Kourtney has shared she no longer wants to do the show, and with Kim and hubby Kanye West’s divorce looming, they cannot be counted on. Khloe Kardashian, the youngest Kardashian sister, has shared she is tired of having her love life played out on TV and is convinced that is why she is not meeting the right kind of men.

Khloe feels the show is preventing her from finding true love. Kim and Kris had a pow wow about Kim’s divorce from Kanye when discussing Kim’s future and the future of the show. They decided that they’d start setting up storylines to show friction among the sisters—prompting them to each go their own ways and, in turn, get their own shows. Viewers will see the sisters fighting more and more, with more and more low blows. Kourtney will pretend to set out to prove Kim wrong about buying Kourtney’s career. Cameras will follow Kourt and husband Scott Disick as they raise their 3 children.

Kim’s show will focus on her moving on from the divorce, starting a new chapter of her life without Kanye. She’ll break away from the family to stir up drama and create intrigue in the new shows. Fans are so used to the family being together as one unit, and with so many installments of KUWTK and the spinoff shows, fans are becoming bored of the same old thing. Kim wanted things to be different for the brand after divorcing Kanye—she didn’t want the show to follow the same format as with her divorce from Kris Humphries. Plus, Kim feels she is a big enough star in her own right and is ready for her own show. It is also reportedly going to help her through her divorce as it will keep her mind focused on something else.

Be prepared for the set-up, CDLers. You’ll be seeing more and more friction between family members on the show, but remember….the Kardashians plan everything they do with a selfish goal in mind that always involves staying power and money. Will you watch Kim’s show after her divorce when there is no Kanye West?

Kim Kardashian is spotted out shopping on a rainy day in Beverly Hills, California on January 10, 2015. Kim admitted to having a hard time getting pregnant with her second child and says its now in the hands of God if she gets pregnant again by FameFlynet