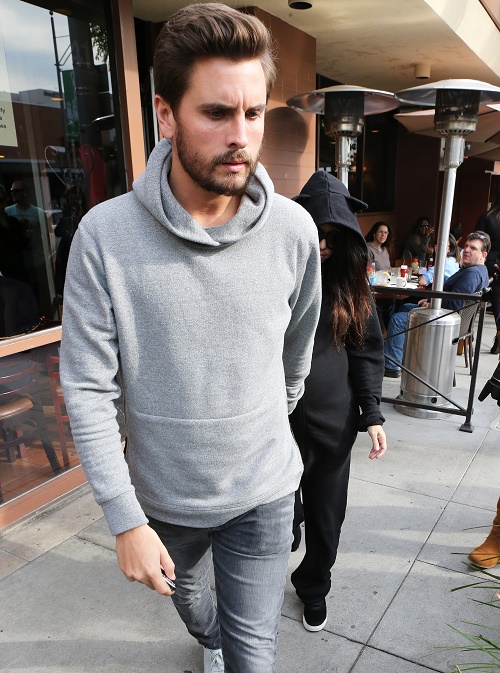 There is never a dull moment in Kourtney Kardashian and baby-daddy Scott Disick’s tumultuous relationship. When the Keeping Up With The Kardashians star isn’t busy popping out babies, she spends her days trying desperately to keep her long-time boyfriend from embarrassing their family and overdosing. Although the couple’s relationship is constantly strained by his alcoholism and trips to rehab, cheating scandals don’t seem to be a problem for Kourtney and Scott. But, according to new reports, that’s just because Scott pays off his mistresses to keep them quiet.

The January 19th edition of OK! Magazine reveals that after Scott cheated on Kourtney in Miami in 2012 – he actually paid the girl $200,000 and bought her a new Mercedes to keep her quiet! That can’t be good for the kids’ college funds. OK! reveals, “Scott and Kourt’s relationship almost imploded in 2012 when Scott was caught in bed with one of his conquests – by her boyfriend! A source says that after slinking out of the woman’s house, Scott paid her to keep quiet – with a gift of $200,000 and a new Mercedes Benz.” A source close to Scott’s Miami mistress informed the magazine, “The woman Scott paid off has flings with rich men. She can’t afford a Mercedes on her own – I wouldn’t be surprised if they still hook up while Scott is in Miami.”

Scott Disick is a raging alcoholic and we have all seen him black-out-drunk on numerous occasions on Keeping Up With The Kardashians. It really is a miracle that he hasn’t been caught up in more cheating scandals considering how much he parties and all of the young women he comes across at club appearances. The part we are having a tough time buying – is how did Kourtney Kardashian not notice hundreds of thousands of dollars missing from their accounts? It’s no secret that Kourtney is ridiculously cheap and is constantly worrying about money, she even took up extreme couponing before!

Do you think Scott really paid a woman $200,000 to keep quiet about their hook-up? How many other women has he paid off to hide his cheating? Do you think Kourtney knows about the scandals and doesn’t care, or is she completely oblivious? Let us know what you think in the comments below!