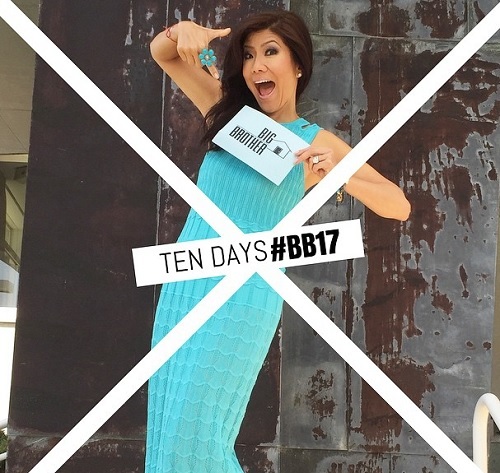 Big Brother 2015 spoilers are rolling in, and on Tuesday, June 16, CBS will announce the official Season 17 cast. Rumors have been floating around for weeks now that there could be another All-Stars cast on Big Brother this summer, but according to an all new set of Big Brother 2015 spoilers courtesy of host Julie Chen, well, that is not the case. It doesn’t look like we will be seeing any returning players in Season 17. That doesn’t mean that there will be any shortage of drama though!

Big Brother’s First Lady, Julie Chen, took to Instagram to share some spoilers for the Season 17 premiere. Julie posted a photo of the first page of the script that she will be reading when the houseguests move in this month. Although Julie’s BB17 spoilers were vague, they did confirm two things: there will be all new houseguests this year and no All-Stars. Also, the rumors of a “Blood Vs Water” theme are also out, because Julie says the houseguests are all “complete strangers.”

The script reads, “Tonight the marathon battle for a half-million dollars begins. New house, new house guests, and a brand new twist that is sure to keep everyone on their toes and scrambling all summer long. For the next three months these complete strangers will be cut off from the outside world, while these cameras and microphones capture every dramatic moment. Get ready for the ride of your life…”

Sadly, we have no idea who the new houseguests are or what the new and exciting twist is. But Entertainment Weekly did share some exclusive photos of the new Big Brother 17 house that the contestants will be moving into – and it looks amazing! The rooms include all new themes, a massive indoor hammock, some interesting remodeling was done in the HOH room – and there is even a new “Sky Bridge.”

Are you as excited as we are for the Big Brother 2015 cast reveal on June 16? What do you think the big, exciting twist is that Julie Chen teased? Are you sad there won’t be any returning players this summer? Let us know what you think in the comments below and don’t forget to check CDL tomorrow for more Big Brother 2015 spoilers and news.