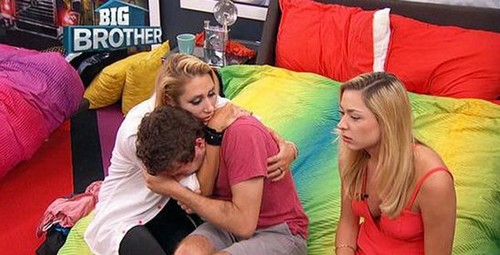 “Big Brother 17” spoilers are in and it is becoming pretty difficult to figure out where Vanessa’s loyalty lies – of course this is being generous and allowing that Vanessa has any loyalty to anyone other than herself. She seems to be aligned with both Steve and Liz equally and pledged her loyalty to both players. If Vanessa wins the final Head of Household competition, it will be a toss up to which of the two players she will take to the end. She has promised both Liz and Steve that they are her final two, who is she going to take to the end?

At 11:11 A.M. BBT on Sept. 21, Vanessa asked Liz if Steve had approached her about what he’d do if he won the final comp. Liz said she was open to speaking to Steve about the game. Vanessa seemed to be trying to make peace with Liz – and try to sway her to vote for her to win should Liz be evicted tomorrow night. Liz told her that Steve hasn’t even tried to talk game to her, which makes her confident that he planned to vote her out on the finale night. The truth is he is planning to vote Vanessa out – taking Liz to final two.

Vanessa tells her that no matter what she is taking her to the final two. Vanessa explained she may need to make a deal with Steve, just in case he wins the final competition. She said, “No matter what you hear from Steve or me – our deal is the real one. You and me, 100%” It seems to be identical to the conversation she had with Steve just a few days ago. The fact is either way Steve goes – taking Liz or Vanessa – he is likely going to come in second place. The real drama will come if it is between Vanessa and Liz. It doesn’t seem like a likely scenario.

It looks like Vanessa is back to ‘buying’ her way into the finals. If you remember, production advised her a few weeks ago that she couldn’t share her winnings with other houseguests. Yesterday, she told Liz, “If I won, like, the people who have been good to me in this game are going to have a Merry Christmas… I’m a big sharer. All my success in life I’ve always shared with other people.” So Vanessa is cheating and breaking BB17 rules – why is production not calling her on this? Well CDL reported that many observers and sources claim this season’s Big Brother is rigged for Vanessa to win.

It seems very unlikely that Vanessa would take Liz to the end. With her playing the odds, she would factor that Liz has two votes locked in – Austin and Julia. She may be forced to evict Liz in order to increase her odds of winning the game.

Vanessa restated to Liz not to tell Steve about their final two deal, under any circumstances. She notes, “It’ll ruin everything.” Fans know that is really a code for it will blow up Vanessa’s game. Who will win the final round of the HoH competition? And, who will they take to the final two? Don’t forget to check back later for round-the-clock CDL “Big Brother 17” coverage as the season comes to an end.