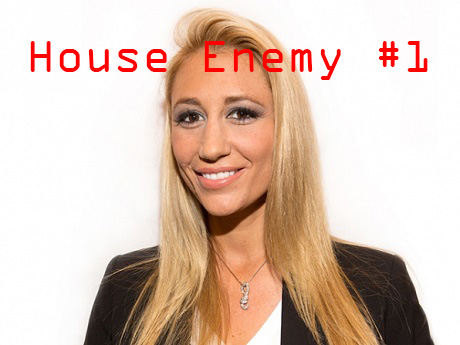 Big Brother season 17 spoilers from the CBS LIVE Feeds tease that Vanessa Rousso’s days are numbered in the BB17 house – and she is walking around with a huge target on her back. Early in the Big Brother game, Vanessa emerged at the head of the pack. The professional poker player seemed to be able to manipulate everyone in the house, and began making deals left and right. But it looks like her aggressive game play has caught up to her – and she could be facing eviction any week now.

Big Brother spoilers indicate that Becky is the primary target this week and will most likely be evicted during the live episode on Thursday, August 20. But that doesn’t mean that Vanessa Rousso has dodged any bullets. Her former alliance members Austin and twins Julia and Liz Nolan (AusTwins) are well aware of Vanessa’s dirty dealings in the BB17 house – and they are just buying time until she is sent home.

Obviously, Austin and the twins don’t want to get their hands dirty by evicting their own ally. They are currently laying low and letting Vanessa Rousso believe that she has pulled the wool over their eyes – which is actually a brilliant strategy in the long run.

Regardless of when Vanessa Rousso is evicted, it’s safe to say that the odds of her bringing home the half million dollar prize are slim to none at this point. The only reason she is still in the BB17 house is to serve as as a pawn for AusTwins. Whoever is crowned the Week 9 Head of Household will most likely be gunning for Rousso, and at this rate she isn’t going to have any votes left.

What do you think led to Vanessa Rousso’s down fall in the house? Did she play too strong, too soon? Could she still rally and make a new alliance in the house? Let us know what you think in the comments below and don’t forget to check CDL for all of your BB17 spoilers and recaps.