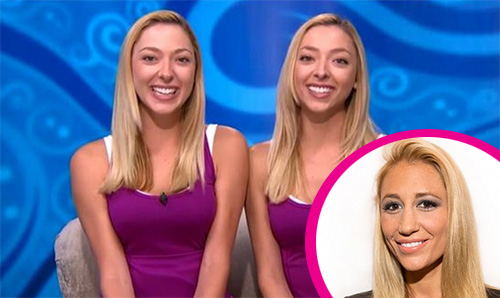 No matter how hard Vanessa tries to keep her head above water in the coming days on Big Brother 17, it’s only a matter of time before the houseguests take her out and submerge her for good. We once deemed Vanessa as the Big Brother season 17 master manipulator, but now she’s seemed to have taken on the more appropriate title of Crazy V, as her current strategies exist around yelling, crying (or combination of both), and exaggerating past scenarios in an effort to muddy the BB17 waters.

According to Big Brother spoilers, John has had enough of Crazy V. In fact, the Cool John and Crazy V got into it a bit, as revealed on the LIVE Feeds. This chain of events unleashed will likely spell disaster for Vanessa in the coming days (depending on how the PoV Comp plays out) or weeks.

Here’s a brief recap of what went down – and, if you’re not watching the LIVE Feeds, things will undoubtedly become clearer when you see the drama air on the weekly showings. After Crazy V and John talked, Vanessa made a point to go chat with Steve privately to clear up some stuff about whether or not he revealed private information to John. John followed V and barged into the conversation, demanding to know what was being talked about. This of course didn’t go over well with Vanessa, and would provide her with material for a later conversation to be had with the Austwins – where she attempts to make John look like a rage-filled monster with red, glowing eyes.

During the conversation she had with Austin and the Twins, Vanessa said that John barged in on her conversation and he was filled with a terrifying anger. Haha. Vanessa is definitely channeling a bit of Wild Child Audrey Middleton’s craziness here, and, honestly, her attempts to paint John as a fork-tongued villain are coming across a bit desperate.

But, at this point, Vanessa should be feeling a bit desperate. She has to know that the tides in the house are quickly turning. She thinks she has the Austwins on her side, especially after revealing to them that John supposedly said he was gunning for them. However, later, when John arrived in the HoH room to have a heart-to-heart chat with Austin and Liz, the sentiments expressed ended up favoring John.

Long story short, John revealed to them what he knows about Vanessa. He dished it all: everything from how she has been lying about current events to how she yells/blows up and people on the receiving end of her hellfire wind up packing their bags for eviction.

According to BB17 spoilers via the LIVE Feeds, Austin and Liz have expressed their willingness to not only believe John but to place their allegiances with him above those they have with Vanessa. They just don’t trust her anymore – and she’s becoming a liability. They want her out. That being said, they don’t want to be the ones to do it. Classic.

Soon, everyone in the house knows what’s going on with Crazy V. Poor thing. Everyone’s either flat out mad with her or keeping her at arm’s length by making her believe they’re still on her side. What will happen when Vanessa wakes up from this imaginary world she has been living in? Does she think that she’s in control of the energy flowing throughout the volatile landscape in the BB17 house? How much longer will Crazy V be around?

According to spoilers, it’s sort of looking like nominations will remain the same this week after the PoV competition. However, that said, anything can happen. Vanessa probably won’t be going up on the block this week as a RENom no matter what plays out, as the Austwins want to keep her around since she provides them with a main line of defense (i.e. as long as she’s in the house, people will want to go after her over them). We’ll be able to speculate more about final nominations once the PoV finished up and we know who scores the coveted PoV.