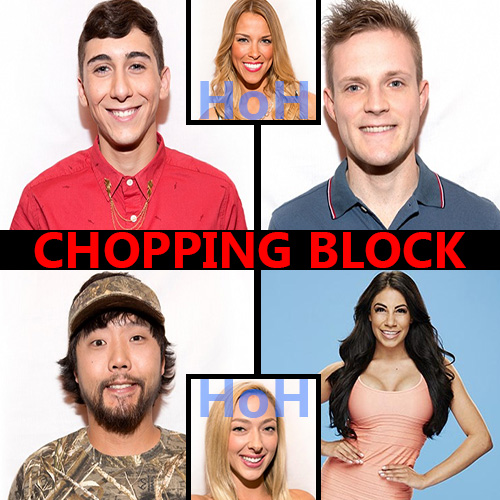 On Big Brother 17 Week 4, the Heads of Households are Shelli Poole and Liz Nolan – and their nominations are in. This is actually the second time Shelli has won an HOH competition; however, it is Liz’s first time in the HOH room. Since the Week 4 HoH competition, the BB17 houseguests have been up all night strategizing and discussing who will be put up on the chopping block for eviction.

Big Brother 17 spoilers from the CBS LIVE feeds have revealed that Shelli, Clay, Liz, Austin, and Vanessa are basically calling the shots this week – just like last week. Did someone forget to tell Vanessa Rousso that she is no longer Head of Household? Then again, someone with a level head needs to be calling the shots – because Shelli’s nomination plans are rather absurd. On the BB17 live feeds, Shelli revealed that she wanted to nominate Audrey and Becky, and told Liz to nominate Jason with Steve or Jackie. Shelli had no intention of evicting Audrey though. She thought that she could convince Jason and Jackie to throw the Battle of The Block competition to keep Audrey safe.

Seriously? Has Shelli even been paying attention to what’s going on in the house, let alone ever watched the show? Very few players are willing to throw competitions to keep another player safe and risk getting themselves evicted, especially this early in the game when it is hard to predict which way the votes will go. Get your head in the game, Shelli.

According to BB17 spoilers courtesy of the LIVE Feeds, we can confirm that Shelli has nominated John & Jason and Liz has chosen to nominate Jackie & James. It will be interesting to see who wins the BotB competition and, as a result, removes themselves from the block and dethrones the HoH who nominated them. Who do you think will come out on top at this point in the Big Brother season 17 game? And who do you think will end up on the block?

Update: James & Jackie won the The Battle of The Block which means that Jason & John lost!