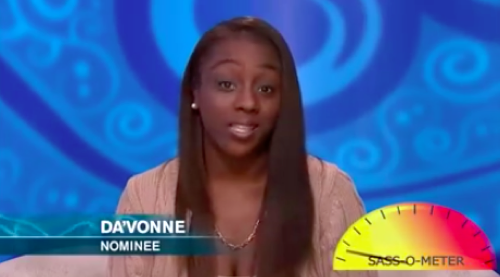 Tonight on CBS Big Brother 17 airs with an all new Thursday July 16, season 17 episode 11 called “Episode 11”, we’ve got your recap down below! On tonight’s episode another houseguest is evicted from the compound.

#BB17 starts with Julie talking about how Audrey has managed to stay off the block so far. Jeff and James are on the block so Audrey is safe unless Gronk has some sort of secret #BBTakeover that would help one of them. Audrey is thrilled that Jeff was nominated instead of hear and she acts nice and hugs Jeff. He’s very upset about being backdoored and is determined to fight this vote. He goes to talk to Jacob and vents about this. Jacob is angry that Audrey escaped nomination again.

Jeff and James sympathize over their nominations but James thinks that he may be safe and that Jeff is the real target. Jackie asks Jeff how this happened and she thinks it’s a huge disaster for her since he’s her only friend. She wants to save him. She talks with Jeff about how he can get enough votes to save himself. Jeff then talks to Austin but isn’t sure Austin is on his side. Jeff tells Austin it’s better for his game to keep him there. Austin is very encouraging and promises to think hard.

He asks Jeff to report back and let him know if he’s got enough votes to swing it in his favor. In his confessional, Austin says it’s because of him that Jeff is on the block. Clay and Jacob talk about who to vote for and Jacob says he trusts James more. Clay says that he thinks it’s better to keep James. Meg comes in and they talk to her and she says she’s back and forth. She says James is a strong player and Clay says she’s thinking too far ahead. Meg says Jeff couldn’t win against any of them.

Meg says James is likable and is getting more likable. She says Jeff could make himself a bigger target as things go on so might be good to keep around. Clay talks to Jeff who says he’s sorry for his mistakes. Clay tells Jeff he played too strong too fast and says if he stays, he needs to change his game. Clay asks if he can tell the truth that he came at Shelli and Clay. Jeff admits to it then says in the future, he will work with them. Clay isn’t sure who to vote for her and they share a bro hug.

She gives him a hug and tells him to stop crying. Jeff then tells Jackie he worked up tears to try and sway Shelli. Jackie says if he can sway Shelli she’ll get Clay to vote to save him too. Time for a #TwinTwist change out. Julia says people knew and says Jeff noticed her scar and fills her in on who is on the block. She tells Liz not to vote for Jeff. They paint nails and bicker then make the swap. Austin says he has a stronger connection with Liz over Julia. We see a montage of him flirting with her.

Austin is even sharing a bed with Liz. Steve comes into the room and she chats Steve up and says she loves him. Then Austin says easy and Steve says he’s the one in bed with her. Liz says her feelings are growing with Austin. Austin says he falls in love too easily and says he can only see her when she’s in the house. Jeff then tries to get a cuddle date with Liz. She kind of blows him off since it’s Julia who likes him. He wants to work and try to get her vote.

He says she acts weird around him. Liz says Julia told her to stay away from Jeff but she thinks she can control it. She goes to talk to him in private and Jeff tells her that he knows she has a twin. She says she doesn’t. Austin walks in and finds them cuddling in bed and he asks what’s going on. Austin is really mad that Liz let Jeff get into her bed and says he has a lot of rage that she’s under the covers with Jeff. He then goes to Vanessa and vents to her. He says he doesn’t like what Jeff is doing or Liz.

Vanessa agrees it’s bad. Then he goes to complain to Clay about it. Liz comes in and she says Jeff was approaching her about the vote. Austin asks why she was under the covers with her. She says there were two other people in the room and she was under the covers so they could talk quietly while others were sleeping in the room. She says that Jeff was asking her about the twin thing and she denied it. Austin says he’s going to make sure that Jeff is voted out but Liz thinks Jeff could help her game because she can control him.

Jeff gets the news and has a few moments to say goodbye to everyone. He gives out hugs all around. He gives Jackie a last hug and whispers in her ear. Then he heads out and gets a pretty good bit of applause from the crowd. Meg comforts Jackie as they are both upset. Julie tells Jeff it seemed like an emotional hug he gave to Jackie and he told her to win this thing. He says Jackie is the only person he trusted there and Julie asks why he distanced himself from her in the house.

Jeff says he knew there would be huge targets on them and he wanted one or both of them to get far so he created an illusion that they weren’t as close as they are. Julie says Jackie seems to be floating and treating it like a pit stop on Amazing Race. Julie says she’s not building relationships. Then Julie brings up his flirting with Liz even though Austin likes her. Jeff says it’s awesome but he’s sure that’s part of why he got kicked out. He says he did it right in front of Austin but Austin is creepy.

Julie says he got four votes to say – he guesses John, Jackie, Becky and Audrey voted to keep him. He says no on Becky and Audrey. They play the videos and Vanessa snarks at him. Jackie says it won’t be the same without him and she’ll kick ass on his behalf. Austin says he’s been playing and no one comes between him and his twins. Liz says she is a twin and then Julia sits with her. They tell him he was blowing up their game. Jeff says one of the twins kept touching his butt and the other didn’t so he knew.

It’s time for the #HOH competition to crown two new heads of households. Out in the backyard, Vanessa sits it out since she’s not eligible. They go back in time this week to the 1990s. They are in the set of a 90s music video called Bustin’ Moves. They watch two dance performances and they have to answer questions about it that are true and false. The first dance number starts and it looks like typical 90s stuff. The dancers finish and leave.

Julie asks if there were eight dancers. It’s false, there were seven. James, Jason, Steve and Clay get it wrong and are out. Next is that there were three men. That’s true. That sends Meg and Austin out of it. Next is that the dancer in the orange plaid shirt put the boom box on the floor. That’s false. Audrey and John are out making Liz and Shelli the two new HOH’s. Julie asks who will these two target for eviction. She congratulates Liz and Shelli.

Liz says she’s excited and is hoping for a letter from her dad. Shelli says she’s hoping for more family photos. James says he’s happy to still be there and he knows he had four votes against him but that’s all behind him now. Jason says the best Gronk party was fun but he fell in the shower. John says he misses his guitar from home. Julie then says the audience have a question for Audrey and asks who is the messiest. She says it’s James and the others cheer.

She says he thinks it’s funny and enjoys it. She says they clean and he destroys it. Then she asks Clay how it is living in the BB house versus the football field. He says the shower is more disgusting. Julie wishes them a good night.