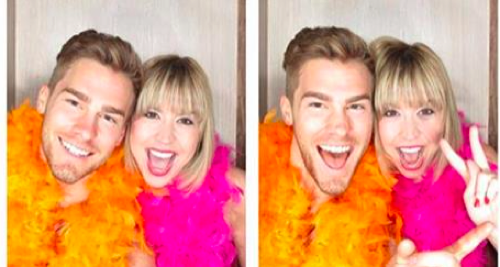 Tonight on CBS Big Brother 17 airs with an all new Wednesday July 9, BB17 episode 8 called “Episode 8”, we’ve got your recap down below! On tonight’s episode another houseguest is evicted from the compound.

On tonight’s BB17 as per the CBS synopsis “a vote determines who is evicted; the remaining house guests compete for the head of household position.” Who do you think is getting the boot tonight?  Da’Vonne Rogers or Meg Maley?

It’s the live eviction night on #BB17. Julie talks about crumbled alliances and broken promises and it’s only week two. Julie says the power of the last laugh is in play so the results are not a lock. It’s day 19 and Da’Vonne is upset and says no one will vote against Meg. She knows she’s in trouble. Audrey is shocked that she’s not on the block. Shelli cries and says she knew Da’Vonne was coming for her and says it breaks her heart she has to send her home.

Da’Vonne, Meg and Jason talk about the votes and wonder if the twist could save both Meg and Da’Vonne. They are called for a takeover. There’s a big red phone booth in the house. Kathy Griffin announces she’ll be calling with tips for them but only one call will help them. She tells them one call will allow the person who answers to block three people from voting. Da’Vonne is very excited. She thinks she can win it.

Jason gets the first call and the tip is to try and be less annoying. He says – this bitch. The phone calls keep coming and people are lurking nearby. Jeff takes phone call six. Clay says seven is his lucky number. Da’Vonne gets call seven and is told that she just won the #PowerOfTheLastLaugh. She comes out and says Kathy is hella rude. She doesn’t tell the other people she got the power. She goes into the kitchen to do a happy dance and thank God.

The calls keep coming. They are all insults. The calls finish and they wonder who got the call and who is lying. Da’Vonne tells Jason she got it and he’s excited. Jason says she needs five votes. She’s got Jason and just needs four more. She talks to Vanessa and asks if she’d vote for her. She says yes. Then he asks John to vote for her and he gives his word. Then she goes to talk to Audrey who says she would vote for her.

Audrey wants her to stay so she will stay the top enemy and keep the focus off of her. They shake on it. Clay tells Shelli he’s mad that Da’Vonne took his number seven. She tries to calm him down and he says she’s not moping and he’s sure she won it. Shelli says that means he won’t get to vote. Shelli says she was feeling confident but if the wrong person gets the last laugh, Meg could be going home. They talk about who would vote with her.

They decide John, Vanessa, James, Austin and Steve might do it. Liz and Julia meet to catch each other up and decide they have to keep their tan even. Da’Vonne says there’s a pair of twins in the house and says she’s sure it’s Liz. She says she’s sure. She says Liz’s body is not the same every time she sees her. She says her weight is not consistent and one of them is more friendly. Jason talks about how they wear a lot of hats and eyeglasses. She comes for a drink and Day asks to see her glasses.

Jason says he really thinks they’re right and she’s one of a pair of twins. They go to tell Jeff. They talk about one being fat and one being skinny and Jeff asks which one he should go for. Jeff goes to look at her and a bunch more follow. They go look at her photo. Clay and Shelli get up and go see what’s going on. They tell them they think it’s the BB5 twist. They talk about her laying low until her sister comes in. Day says she wonders how she can use it to her advantage.

Da’Vonne goes to tell Liz in private that she needs to stay calm. She says people are saying she’s a twin and she’s swapping in and out. Liz acts shocked. Liz is surprised people are on to them so early. Da’Vonne says she needs her vote and she can help Liz support her. Da’Vonne says she knows she can’t confirm it, but she can see the stress on her face. Da’Vonne chose the three houseguests she’s blocking from voting. That will now be announced to the others. Jeff, Jackie and Becky are not voting.

Now it’s time for the live vote. Day and Meg get one last statement before the vote. Da’Vonne tells Meg she likes her and loves her daughter and says there’s a pack of cowards targeting her because she’s strong. She tells Jason she loves him and says to please vote for her and is strong and will protect her. Meg then says Da’Vonne is so strong and it’s a hard week. She says she has more game to play and has been playing a loyal game and asks them to keep her in it.

Julie announces that Da’Vonne is going home. She hugs Meg and takes it with Grace. She gives Jason a big warm hug then heads outside. She gives Julie a big hug and the crowd is cheering. Da’Vonne says she was worried the audience would hate her but they cheer. Julie says she did figure out the #TwinTwist. Julie asks if it was a mistake not to kept that to herself. She says she was hoping to scare her into voting to save her.

Julie asks if it would have worked better if she had gone to just Liz and not told others. Julie asks why Audrey isn’t sitting there and Da’Vonne says they’re cowards. Day says they are scared to nominate her because she’s transgender but Day says they have to separate that from Audrey the player. Julie asks if that will cost people and Day says she thinks Audrey could slide to $500k. Da’Vonne says she thinks she was too vocal in the game and that’s what got her kicked.

She says confronting Audrey got her sent home. Da’Vonne says she wouldn’t do it differently. Julie plays the videos. Clay says they had a falling out and then didn’t restore trust and he hopes to see her later. Audrey says karma got her. Jason says she’s his only love and says he would have been lost without her there. He says he’s not playing for her and will win it for us. Liz and Julia greet her and tell her she blew up their game and has to go.

Julie says that Audrey did vote to oust Meg tonight even though she taped a negative message. Da’Vonne says she must have still wanted to work with her. Next is Rob Gronkowski for the next #BBTakeover. Gronk says it’s his party week and says he doesn’t like have nots so he’s getting rid of that. He says the competition starts now and says to get to the backyard for the HOH competition. In the backyard, it’s #HOH time.

Shelli can’t participate since she’s outgoing HOH. Julie says they’re playing Gronk Pong. They have to launch a ball toward cups that are each numbered 1-55. Blue cups are higher from 49-55. Those with the highest scores are the new HOH. If you miss, your score is zero. In a tie, it goes to a tie breaker. Liz is up first. She gets a 23. Jackie goes next and she misses. She’s out of it. Next is John who also misses and is eliminated. James is next and he ties Liz with a 23.

James, Liz and Vanessa face off. Liz gets a 22. James gets 35 and Vanessa lands a 52. That means Vanessa and Austin are the new HOHs for this week. Everyone hugs them and congratulates them.