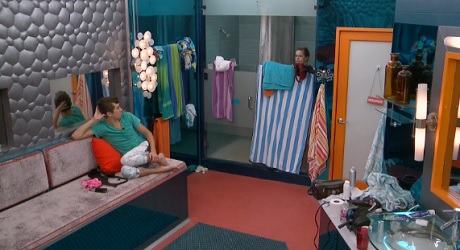 Big Brother 17 spoilers confirm that Jackie and James, the two houseguests nominated by Liz, won the Battle of the Block competition. This, of course, means that they have removed themselves from the block and ousted Liz from her HoH position. This leaves Shelli the reigning Head of Household and, while it might prove advantageous for her and Clay’s romantic relationship (they get to share that super comfy HoH bed!), Shelli continues to make a name for herself in the house – and it’s stressing her out big time. This is her second time being HoH, which means that she’s likely to get more “blood” on her hands during Week 4, a concern she has expressed on more than one occasion.

BB17 spoilers via the LIVE Feeds on Friday showed Shelli talking about how her decisions this week were centered around her desire to limit the amount of blood on her hands. She nominated Jason, a player who, according to house rumor (primarily perpetuated by Wild Child Audrey), was gunning for her. Alongside Jason, Shelli nominated John, a player with whom Shelli and Clay are closely aligned. She knew that John would not be angry with Shelli or hold a grudge against her down the line. Shelli also confirmed to him that there’s no chance he’ll be going home, as he has plenty of votes to keep him active should he lose the Power of Veto competition.

It will be interesting to see who takes home the Power of Veto. John has had a lot of success with competitions, and he has won and used the PoV before. Will he have what it takes to take home another victory where it counts? Leave your thoughts in the comments section below and don’t forget to check out CDL for all your Big Brother spoilers, gossip, news, and updates.

Big Brother 17 Live Feeds Highlights 7/18/15 (this post will be updated over the course of the day, so keep checking back often):

Flashback to Friday Night — Shelli is supposedly fed up with Audrey, so much so that she’s finally decided to go through with a backdoor plan. Supposedly, James came up to speak with Shelli about how Audrey came to him to express her anger at how Shelli threw her under the bus by saying she was upset with Jason. Shelli updates Vanessa and the squad about her plan – or idea – and they all seem to be on board, especially after Shelli reveals to Vanessa that Audrey told her that she had formed a final two deal with Vanessa. Whut?! This kicked V’s ass into high gear.

V is worried that Audrey will expose Sleeper Cell should they upset her too much, but Shelli doesn’t care, especially since she’s super annoyed with Austin at the moment for running his mouth to Jackie. She doesn’t want to work with him anymore.

Early Morning (approx 5:30 AM PST) — Shelli grows wishy washy with her plans and wonders if this week is the right week to carry out the Backdoor Audrey Plan. Oy vey! Later, Vanessa meets up with Austin and Julia and tells them of Shelli’s thoughts regarding Backdooring Audrey. They’re on board. Vanessa warns Austin to keep his mouth shut and to, instead, try to warm up to Clay and Shelli by talking dirt about Audrey to them – but Vanessa tells Austin not to tell them that she conveyed Shelli’s potential Backdoor Audrey Plan to him.

9:55ish AM PST — Meg’s showering and Jason is in the bathroom sitting on the couch. They talk about the current state of things, including Jason’s perceived relationship with James in the house. Jason says that, if anything, he’s closer to Meg (who’s closer to James). So, by extension, Jason has been associated with James. He’s tired and yawns. He says he’s going to go rest before “she calls us for the thing.” I assume he’s talking about the PoV ceremony, which should occur later today sometime.

10:01 PST — A majority of the houseguests are still snoozing away as usual.

10:23 PST — Vanessa is in the HoH room with Shelli and Clay. Vanessa tells them that she’s literally boiling inside and says that she’s about to explode. She’s hurting that Audrey is treated her like this and is so untrusting of her. Vanessa says that she understands she could never FULLY trust Audrey but that she never expected this amount of paranoia from her. Shelli tells V that she needs to keep a cool head as much as she can because it won’t look good for her to look like a loose cannon and have another blow up so soon after her last blow up with Jeff. Shelli says that she wants to have a long, drawn out talk with V about this situation (and about possible plans and/or scenarios) – but only once she’s not busy and running around putting on her makeup. She’s called to the Diary Room.

10:27 PST — Clay says that he has to bite – rather CHEW – off his tongue to keep himself cool around Audrey. Clay tells her that he agrees with Shelli. Vanessa should keep her cool, at least until after the PoV ceremony.

2:35 PM PST — James and Audrey were in the pantry “quarterbacking” scenarios. Audrey says that Shelli would probably want to win the PoV competition just so she could keep the noms the same and not get anymore blood on her hands. Audrey is pretty confident that, whatever the outcome is, she probably won’t be making her the REnom.

2:41 PST — Everyone is wandering around anticipating the start of the PoV competition. It should be sometime this afternoon/early evening.