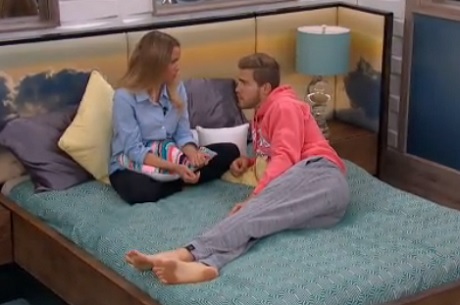 Big Brother 17 spoilers are coming at us fast on the BB17 LIVE Feeds as the drama heats up in the house. After today’s HoH nominations, courtesy of Liz and Shelli, the whispers and chatter have definitely doubled compared to earlier in the week – and thank the BB Gawds for that! According to BB17 spoilers, Liz nominated Jackie & James and Shelli nominated John & Jason. Poor John. John has been put up, yet again, as a pawn – but Shelli assured him that she wants him to try to win the competition this week. She nominated him this week simply because she didn’t want any other blood on her hands. She confirmed to him that if he does somehow wind up on the final chopping block, then he has the votes to stay.

However, just because these four are on the block now does not mean they’ll remain on the block, as everyone will be competing in the upcoming Battle of the Block competition. Whichever two players knocks that out of the park will remove themselves from the good ol’ chopping block and, of course, dethrone the HoH who nominated them.

What do you make of the current nominations and general flow of the game? Clay and Shelli continue to get fed up with Audrey AKA The Wild Child’s antics, primarily her ability to manipulate people’s emotions and behaviors in the house. She has her hands dipped in virtually every aspect/group in the house – and this will either lead her to victory or be her ultimate downfall. It’s a good thing Clay and Shelli are smart cookies. Keeping up with the Wild Child isn’t for the faint of heart.

Leave us your thoughts in the comments section below, and don’t forget to keep checking CDL for all your Big Brother spoilers, updates, gossip, and news! As we wait for more Big Brother spoilers to reveal who won the BotB competition, make sure to check out some highlights from the LIVE Feeds below.

Big Brother 17 Live Feed Highlights 7/17/15 (this post will be updated over the course of the day, so keep checking back often):

11:55 PST — Audrey and Shelli are chatting and sort of getting into it. Audrey’s mad that she brought up her name in a situation and says that she feels a bit betrayed now. Audrey tells her that she feels her relationship with Clay and Shelli is too one sided and not going both ways equally.

12:38 PST — Audrey and James are chatting (rather whispering) in the bathroom. James can’t understand why he’s up again, and Audrey encourages him to “try” to win. She tells him to give it his all and James says he will try to do his best.

12:45 PST — Austin, Vanessa, Liz, Shelli, and Clay are all in the HoH room talking about the subject of (can you guess?) . . . Audrey. Audrey’s trust is always the topic of major discussion. Vanessa asks them, once again, if she can trust Audrey. Clay adamantly says NO. But we know Clay’s current feelings towards Audrey. Shelli and Vanessa joked that Audrey needs a babysitter 24/7 to keep an eye on her. That might not be a bad idea.

12:51 PST — Shelli tells Clay that she talked with Jason earlier. He’s very upset. Shelli also tells Clay about the good-natured conversation she had with John. She told John that, this week, she wants him to try to win the BoB competition and not throw it. She told him to go out there and try to win that. If he doesn’t win that, try to win the PoV, and if he doesn’t win that, Shelli wanted to assure him that he has the votes to stay. Shelli’s justification for putting up John was that she doesn’t want any unnecessary blood on her hands. Apparently, Audrey has formed a final deal with John – and John has supposedly accepted it under false pretenses. John told Shelli about this. John plans on being Chelli’s undercover informant on the Audrey front.

1:00 PST — Shelli tells Clay that another thing Audrey keeps trying to do is make her DOUBT Vanessa. Haha. If Audrey, V, and Austin’s little alliance is still in effect, this could all be part of their master plan to shake up the Shelli+Clay bond. Shelli then tells Clay that Audrey told her that she thinks Vanessa, Austin, and Liz are working together and alongside Steve. Audrey wondered why Shelli didn’t put up Steve. Audrey’s really afraid of Steve and, because of this, is trying to make it look like Steve is a threat towards their game.

3:48 PST — Clay and Shelli are trying to be super adorable in bed together. Shelli asks clay if he prefers the lake or the beach – and Clay can’t answer this question simply. GAH BECAUSE HE JUST LOVES THEM BOTH SO MUCH!

3:51 PST — Austin and Julia chat in bed. They continue to try to keep up the Twin Twist hidden. Austin is very close with Liz so, by extension, he takes great interest in Julia.

3:52 PST — Johnny Mac and Steve are chatting in the kitchen about competitions. Steve has an amazing memory, so he’s looking over past seasons to figure out what types of competitions might go where/show up. Steve says that, rarely, does Big Bro repeat twists – except for, as is the case with season 16 and now 17, the Battle of the Block competitions. Johnny says that he really liked the Coaches Twist.

3:54 PST — Clay and Shelli are still playing the “where would you rather go” game. Their entire Big Brother 17 relationship is like one long, giggly, super drawn out first date. Next, Shelli asks him what’s his fave type of food. She asks him if he’s a “wing” guy. He says not really because when he was in college he went to Buffalo Wild Wings and got really bad food poisoning.