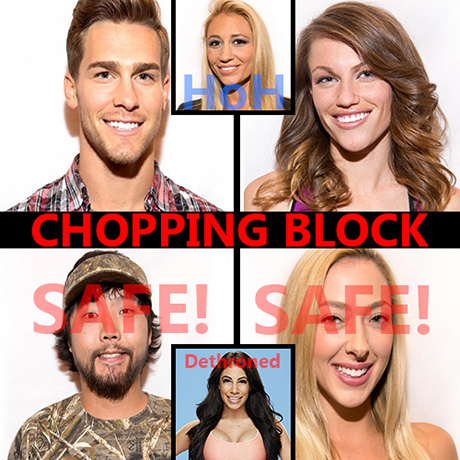 Jackie and Vanessa recently scored the coveted titles of Heads of Household. According to Big Brother 17 spoilers via the LIVE Feeds, we know they nominated Clay & Becky (V’s noms) and James & Liz (Jackie’s noms). The Battle of the Block competition has already taken place and has proven, once again, that things don’t always go as planned in the Big Brother House. James & Liz were supposed to throw the competition; however, that plan fell through when the exact opposite thing happened: Clay & Becky lost.

This of course means that Vanessa will remain Week 5’s official HoH and undoubtedly be required to get some blood on her hands as another eviction approaches. Things can still change on a whim, seeing as the Power of Veto competition has yet to take place, but people might try to get Clay out of there if he doesn’t (or one of his friends doesn’t) end up saving him. I don’t really see this happening this week though, as Shelli and Vanessa probably wouldn’t let this scenario see the light of day. Yet.

Vanessa is a really strong player and she definitely has a knack for strategy and seeing the big picture, as well as the nuances, of the game. She is a professional poker player after all. But just what kind of moves will she make in the coming days? If she’s forced to make a REnom, it’s anyone’s guess as to who will actually be named, but Steve’s definitely a possibility – as is Austin. Do you think Vanessa would betray Austin? It would definitely be a smart and strong move.

In other BB17 spoilers news, Liz has successfully made it to Week 5 – and will be safe this week after conquering the BotB competition. And do you know what that means? Come Week 6, Julia, Liz’s identical twin, will be able to enter the house and play the game as her own player. How will the house react to this double feature on Big Brother season 17? Leave your thoughts in the comments section below and don’t forget to check CDL for all your Big Brother spoilers, news, gossip, and updates.