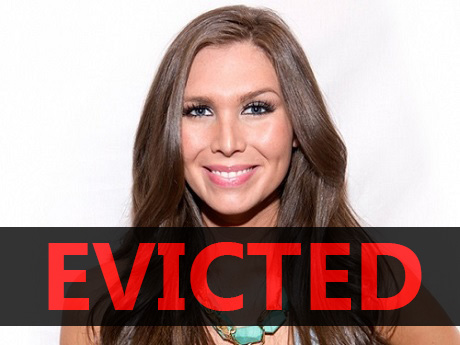 According to Thursday night’s Big Brother 17 LIVE Eviction episode, CBS’s first transgender player, Audrey Middleton, has been officially evicted from the BB17 house. She is the fourth person to be eliminated this summer. When Big Brother 17 kicked off it was pretty clear that Audrey wouldn’t last long in the house.

When she should’ve been sitting back and letting the other players pick each other off, she went on the offensive and began stirring up drama and forming half-hearted alliances left and right. Big Brother spoilers via the LIVE Feeds have indicated for a while now that this plan was in motion – and thanks to Shelli and Vanessa, as well as the rest of the house, the Wild Child has been sent home.

Week 4 of Big Brother has been a dramatic one in the BB17 house. At the beginning of the week, Audrey wasn’t even an initial target in the Big Brother house, but she quickly sealed her own fate after a messy argument with Clay – which probably wasn’t the smartest move seeing as how the other half of his showmance, Shelli, was the reigning Head of Household. After Audrey’s temper tantrum and outbursts the house was basically unanimous, and she was backdoored and put up on the chopping block along side John.

After the Power of Veto ceremony, Audrey knew her fate had been sealed – and BB17 spoilers indicated that she spent most of the remainder of the week pouting in the Have-Nots room. Although she did put on her blond wig earlier today to have a little bit of fun before her big exit. You could argue that Audrey’s demise was that she got caught lying to her “alliance,” but Audrey basically sealed her fate from day one. She spent too much time trying to make as many friendships and relationships as she could – rather than a few really good, strong relationships. Audrey Middleton is basically the Devin of Big Brother 17, and she did too much too soon in the game.

Will you miss Audrey in the BB17 house, or are you happy to see her go? What do you think was her ultimate demise? Share your thoughts and theories in the comment below and don’t forget to check CDL for daily Big Brother 17 spoilers and recaps.