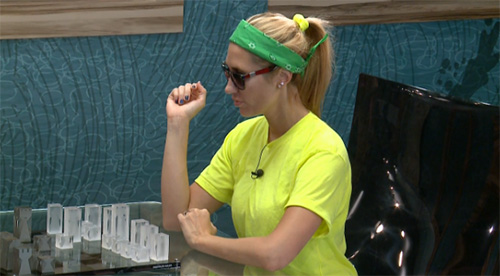 According to Big Brother 17 spoilers via the CBS LIVE Feeds, current HoH Liz, who held the PoV Ceremony earlier, kept the nominations the same: John and Becky remain on the Chopping Block and are at risk of being evicted. While it’s still a bit early to say for certain who will be going home at the end of Thursday’s LIVE eviction, things are definitely looking pretty good for resident dentist Johnny Mac, who recently gained the full-out trust of Austin. By extension, he’s good in the Twins’ book, too, seeing as how the AusTwins are so tight in the game at the moment.

After the Veto Ceremony, Vanessa undoubtedly took a major sigh of relief. She dodged a bullet this week, but it’s unclear how many more bullets she’ll be able to dodge before the HGs finally send her packing like they did Clay and Shelli. Vanessa better work some hardcore magic in the coming days if she’s going to stick around for much longer. The houseguests see her as a threat – and the only reason her “alliance” members (AusTwins) are keeping her around is because she’ll always be the bigger target over them. They’ve mentioned that she needs to go – and they’re just waiting for someone else to get the job done for them.

It’s going to be an all-out fight for the next Head of Household, and, according to Big Brother season 17 spoilers, nearly everyone has made a point to say that they WILL NOT be throwing the competition. Good. People are finally starting to realize that that’s never really a great idea. Also, don’t forget that, sometime in the future, the game will bring back a previously evicted houseguest (a jury member) to shake things up – and that’s never a good sign for the surviving members of the game.

What do you make of these recent outcomes? Be sure to keep checking CDL for all your BB17 spoilers, updates, news, and gossip!