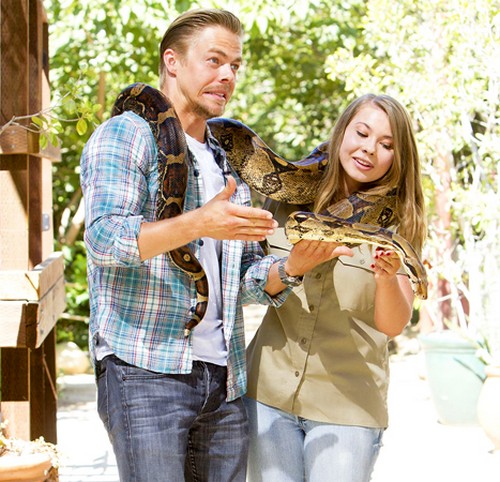 Bindi Irwin will be paid for her mirror ball trophy win to the tune of $350,000 after a judge approved the minor’s contract with Dancing With The Stars after an awkward ruling that required proof of her father Steve Irwin’s death.

Another big win for Bindi Irwin as TMZ broke news that the Aussie nature lover could collect on her recent DWTS win. Irwin raked in a total earnings of $350 from the popular competition when the 17-year old danced her way to the end. The problem was, Bindi couldn’t get paid until a judge signed off on her contract because she is a minor.

The contract snafu became big news when a judge refused to allow Bindi Irwin’s Dancing With The Stars contract until she proved that her father was giving up rights to her earnings. Sadly Steve Irwin passed away in 2006 and pretty much everyone on the planet knows that. It’s unclear if the judge was living under a rock or if maybe he was just a stickler for details.

In any case, Irwin couldn’t collect until she provided a death certificate for Steve Irwin to prove that he wasn’t going to pop back up and demand a piece of her earnings. Now that Irwin has access to her DWTS paycheck, we wonder what she will do with it. It’s not like the teenage conservationist is struggling for cash. Bindi already boasts a net worth of $3 million.

To make sweet news even sweeter, Bindi was joined in Australia by her DWTS coach and partner, Derek Hough. It has been two weeks since the finale of Dancing With The Stars where Derek and Bindi beat Nick Carter and Sharna Burgess for the top prize. Derek’s win with Bindi is his sixth time taking home the mirror ball trophy.

Derek has been posting pictures of his trip down under and it really looks like a blast. It was probably fun for Bindi to turn the tables on Derek Hough for once and show him what her stomping grounds look like. Both Derek and Bindi posted a photo of themselves posing next to a pretty large rhino. Irwin captioned her version, “So happy to get to introduce you to our world here in Australia! You are officially a Wildlife Warrior. Bring on the adventure!”