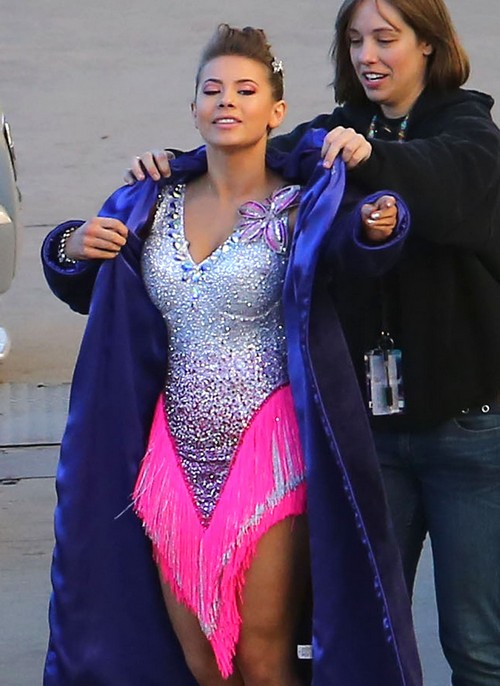 Derek Hough recently talked about his “Dancing With The Stars” partner Bindi Irwin and even though the Australian actress is on point to win the whole competition, Derek is bragging that it’s his skills getting them to the end because Bindi has two left feet.

Bindi Irwin is just 17 years old and it looks like she might beat out the competition and win the mirrorball trophy in season 21 of “DWTS.” Apparently the daughter of “The Crocodile Hunter” Steve Irwin has come a long way in here training because she looks pretty comfortable on the dance floor.

In an interview with Entertainment Tonight, Derek Hough talked about how he got Bindi ready to compete. The “DWTS” alum has five wins so far with his most recent victory in season 17 with Amber Riley. Derek has earned some bragging rights since none of his competition even comes close to Hough’s five mirrorball trophy wins.

Derek has acted as a coach and partner on “Dancing With The Stars” during 15 season prior to the current season 21 with Bindi. Of those 15 seasons, Derek has taken home first prize five times. So basically those who partner up with Hough have a one in three chance of winning the whole contest.

We must admit, the professional dancer has some skills and no other dancer on the show has come close to Derek in mirrorball trophy wins.

Now it seems that Derek has gotten a bit ahead of himself with claims that Bindi can’t dance as he took credit for the dancing team’s chance to win it all again. After Derek Hough put the time and energy into teaching Bindi how to dance, it seems that she surprised the “DWTS” veteran who admitted, “’And now to see her evolve and be aware of her body and [have] this confidence and even her posture is different, it’s awesome.”

Obviously Bindi has put a lot of work in for each of her “DWTS” performances. Derek even feigned humility when he gave Bindi some credit later in the ET interview. Hough admitted that there has to be some raw talent to begin with when he said of Irwin, “And it’s this performance, it’s this connection, it’s this commitment to the steps. It’s teachable, but it’s only teachable to a certain degree…but she goes beyond that.”

Derek and Bindi are all set to fight for the mirrorball trophy as season 21 of “Dancing With The Stars” comes to a close and a winner is crowned on Tuesday, November 24.

Update: of course Bindi won season 21 of DWTS but the point of this story is not the outcome of a reality show, it is about Derek Hough’s hubris…