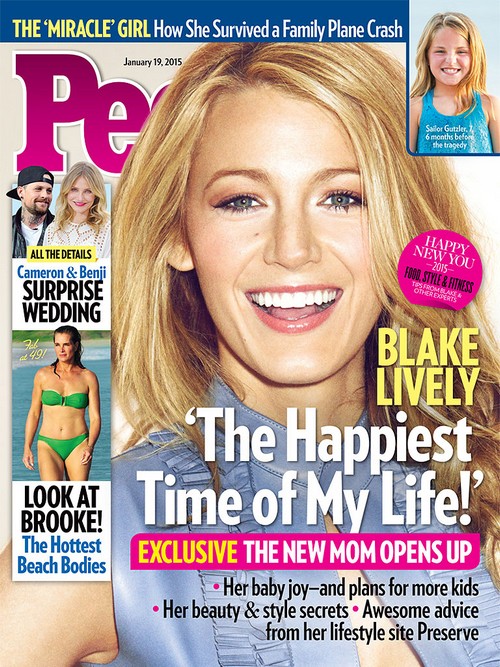 Blake Lively is featured on the newest cover of “People” magazine and inside, she talks about becoming a new mother and the happiness their new baby has brought herself and her husband Ryan Reynolds. There aren’t any baby pictures in this issue – BOO!

In this issue, she said, “I don’t feel like it’s a massive change. I do want to just enjoy this moment. But I also feel like my first child is going to be the oldest sibling to the next kid, and that may change with each and every year.

Despite rumors that they were already fighting over children, it appears that they are both destined for a big family. She said, “I’m looking forward to how one baby influences the other, and to my family as a whole, to every single chapter.”

The former “Gossip Girl” actress is also looking forward to expanding her lifestyle website Preserve. She revealed to the magazine, “So much of the inspiration came from my mom and my dad and my siblings. All the things I feel like I’m good at are thanks to my family, and they’re things we’re now embracing at Preserve: cooking, decorating, artistry. Family is at the heart of everything I do.”

She is successful, a new mother and is super happy in her marriage. Of that, she added, “This is the happiest time in my life, and I could say that every day. I often feel like, ‘I can’t believe I’m experiencing this.'”

Blake Lively and her husband Ryan Reynolds have been married since September 2012, but aren’t strangers to the gossip when it comes to their personal lives. There have been rumors floating around that Ryan was cheating on Scarlett Johansson with Blake, so naturally we would have to wonder if he is going to do the same thing to her. It’s only a matter of time, so we guess we’re going to have to wait and see. What do you think?